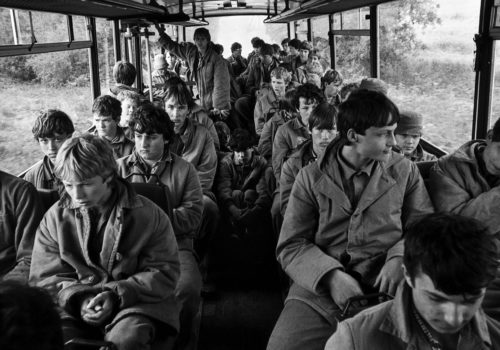 Village People is a set of photographs taken in the western half of Czechoslovakia between 1965 and the end of Communist rule in 1990. As a selection of work by Jindřich Štreit, they offer an absorbing introduction to a gifted photographer who is little known outside of the Czech Republic.

His camera might seem to be adopting a fly-on-the-wall perspective, resolutely unlyrical, but the style is not of the dispassionate, documentary kind. The landscape of his pictures, embracing muted lighting that gives the impression of a perpetual winter, all leaden skies and muddy earth, becomes a load-bearing bridge between a human and a political habitat.

The pictorial content lends itself to an overall picture of desultory and vacant existence alongside human warmth and social intimacy. The structure of feeling and the intimations of stories behind the pictures come across as synchronic emanations of place and circumstance. Scenes are mediated by affects of palpable discontent and inertia of the heart but these are balanced by modes of jouissance. Political meanings – arthritic equality, a failing economy waiting for extinction, socialism without soul – can be read into the photos but to do so exclusively distract attention from their artful qualities.

The qualities they possess are inseparable from Štreit’s thoughtful responses to the rural lives of people around him. Sometimes this appears at a formal level, as in the framing of two boys holding parts of an exhaust pipe, unconsciously adopting poses of weaponized soldiers, or of a baby lying on its back and looking as abandoned as the empty bottle that stands on a nearby table. Other pictures display raw feeling, like ones of despondent mothers at home, suggesting a relationship of openness between subjects and the photographer.

Compassionate compositions include one of a woman, one arm comfortably tucked in her pocket while the other ones reaches out tenderly to touch the back of her partner’s head as he eats while reading a book. Štreit’s eye notices habits of deportment in domestic spheres –a family watching television, a woman standing dolefully before a Christmas tree, an elderly couple outside their door – and is equally adept at picking up body language in public situations: a workgroup’s bored indifference while something official is being read to them; identically attired boys on a bus looking, if they were a little older, like offenders being dispatched to a gulag; women at ease during a break from harvesting potatoes. The black humour in the depiction of a single figure with the posture of a hanged man (a leftover piece of rope from a beam is visible above him) is balanced by the healthy hilarity of a ludicrous scene of two men in gasmasks carrying a short ladder. Positioned somewhere between these two poles of comedy is a picture of a stately line of geese moving across a field while a funeral procession in the background makes its ritual way in the opposite direction. If there was something rotten in the state of Czechoslovakia, it was being peripherally and mischievously acknowledged.

A priest photographed with a kindly arm around an elderly parishioner is one of the few exceptions to a doggedly profane existence where theological and ideological commitments look to be spread very thinly on the ground.

A lack of familiarity with photographers from what was once Czechoslovakia will make it difficult to have a sense of Štreit’s artistic genealogy but text by Vladimίr Birgus in Village People provides useful signposts. He draws a line of demarcation between Štreit’s output and the ‘idealised, ethnographic folkloric approach’ of contempories whose ‘heroicism’ won official approval. Unlike them, Štreit was a schoolteacher anchored in the village life where he was accepted into homes and farms. He had wider connections and in 1982 was arrested for displaying his work in an unauthorised exhibition of artists in Prague. Sentenced to a term in prison and forbidden to teach, the experience did little to daunt his spirits and he was rewarded with recognition of his achievement in the years following the implosion of the Communist regime in November 1989. This handsomely produced book from Buchkunst Berlin will extend this well-deserved recognition to a wider audience.