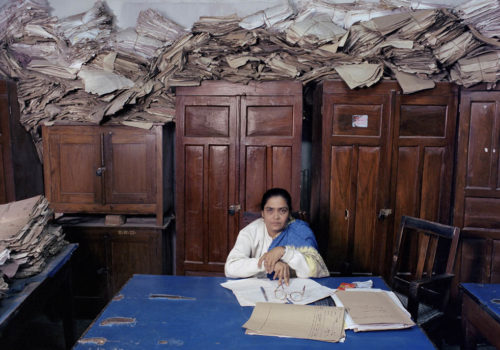 Jan Banning was born in The Netherlands in 1954, from Dutch-East-Indies immigrant parents. He studied social and economic history at the University of Nijmegen and has been working as a photographer since 1981. The central concern in his work is the theme of state power (and its abuse).

Bureaucratics is a project consisting of a book and exhibition containing 50 photographs, the product of an anarchist’s heart, a historian’s mind and an artist’s eye. It is a comparative photographic study of the culture, rituals and symbols of state civil administrations and its servants in eight countries on five continents, selected on the basis of polical, historical and cultural considerations: Bolivia, China, France, India, Liberia, Russia, the United States, and Yemen. In each country, I visited up to hundreds of offices of members of the executive in different services and at different levels. The visits were unannounced and the accompanying writer, Will Tinnemans, by interviewing kept the employees from tidying up or clearing the office. That way, the photos show what a local citizen would be confronted with when entering.

The photography has a conceptual, typological approach reminding of August Sander’s ‘Menschen des 20 Jahrhunderts’ (‘People of the Twentieth Century’). Each subject is posed behind his or her desk. The photos all have a square format (fitting the subject), are shot from the same height (that of the client), with the desk – its front or side photographed parallel to the horizontal edges of the frame – serving as a bulwark protecting the representative of rule and regulation against the individual citizen, the warm-blooded exception. They are full of telling details that sometimes reveal the way the state proclaims its power or the bureaucrat’s rank and function, sometimes of a more private character and are accompanied by information such as name, age, function and salary. Though there is a high degree of humour and absurdity in these photos, they also show compassion with the inhabitants of the state’s paper labyrinth.