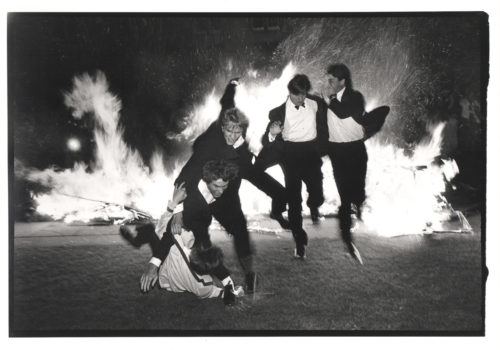 The selection comes from Dafydd Jones definitive series Exhibition in a Box in which he selected 62 of his favorite British and American works. Subjects include Lucian Freud, Hugh Grant, Mick Jagger, Madonna, Kate Moss, and the Queen.

The Box of 62 works was sold in an edition of just 6, with sets acquired by the Martin Parr Foundation and The Hyman Collections amongst others. Now, for the first time, Dafydd has decided to split a set and making available individual photographs from the final set: box 6. This is the only set that has been split and this is the first time that these works are available individually in this size.

There is only one image available of each picture and they will be sold on a first come basis.

Each print is signed and annotated on the reverse and is priced at £ 950.

“I missed the darkroom so partly did these for the pleasure of spending time printing again. In the eighties and nineties I’d be in the darkroom every day. Now I spend half my time sitting at a computer The selection was entirely subjective. Some of the pictures were done before I was working professionally. Most were done originally while working freelance or for the Tatler and Vanity Fair. I wanted to revisit these old pictures and do a new edit. I mainly chose particular favorites but also some pictures had stayed in my head over the years. How I feel about the pictures goes up and down. Some of the pictures have never really been printed properly before. The Bloody Assizes drinks party picture for example I rejected at the time and didn’t include in my final edit of Oxford dining clubs. It was taken at the first Oxford party I photographed. When I came across the old print of it again 35 years later it stood out. So I decided to include. Some favorite pictures I printed and then rejected. A couple have never been shown on the internet or published … After finishing 50 prints I couldn’t stop and kept adding more making a total of 62 images. I printed 6 boxes in my favorite size 11 X 14 inches. So each print is from an edition of 6.They are old and new favorites that I’ve enjoyed printing.”