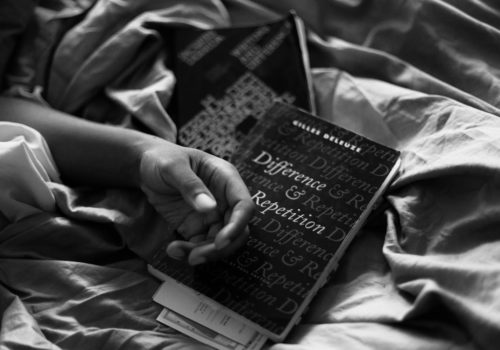 Caecilia Tripp conceives the spaces she takes over  into transgressive writing through photographic works, films, video , sound installations, and performances. The exhibition Going Space, currently on view at the Centre d’art contemporain in Ivry (Crédac), brings together some of Tripp’s emblematic series from 2004 up to more recent productions. The panorama of the city and the American architecture of the former factory ” des Oeillets” is a starting point indicative of her approach.

The paradigm of Creolization, equality in civil rights, and political activism in the lineage of Edouard Glissant (poetics of relation) are among the issues the artist addresses across a wide range of media. Every project produces new cross-pollinations between architects, musicians and composers, writers, physicists and astronomers, each becoming an author in his or her own right in a game of subversion in the service of a new space of freedom and civil disobedience. Cunning is the ultimate form of resistance. Cinematographic and vernacular codes are filtered through “reenactment” or “rehearsal” to become an experimental and transformative space in the name of an imaginary collective.

On the occasion of a residency at MoMA PS1 (New York) in 2004, Caecilia Tripp revisited Getrude Stein’s novel in order to decrypt the codes of construction of the  American identity  in her film The Making of Americans, shot partly on a nocturnal limousine drive through New York’s sites emblematic of American identity, such as Brooklyn, Times Square, or Ground Zero, and partly as a perambulation through the streets of Harlem. The soundtrack mixed by DJ Spooky is like a hip-hop opera, allegorical in scope, providing a rhythm to the back-and-forth between high and low culture, between sounds and images. This piece of “cinema vérité,” straddling documentary and fiction, can be seeing in  the new space Crédakino dedicated to cinema and video,  alongside other films, including Prepare for Paradise Lost, Music for (prepared) Bicycles (after John Cage & Marcel Duchamp), and We are nothing but Stardust

The series of portraits Sleeping with Books, featuring readers plunged in meditative slumber or absorbed in great books, is displayed next to photographs drawn from Tripp’s films amidst a décor designed as a fluid, mobile geography modeled after modern-day globalization. These are utopias which possibly overcome identities.
The highlight of the exhibition is the work Scoring the Black Hole (produced by Lafayette Anticipation), which documents a choreographed performance celebrating a union with the cosmos in a rigorous, minimalist gesture.