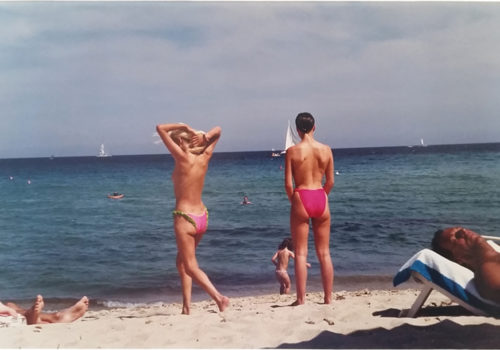 In 1987, I attended the Whitney Biennial. I was so taken with the salon-style installation of Bruce Weber’s photographs that I went back to see the exhibition three more times. After my last visit, I decided I wanted to own some of his pictures so I could live with them every day. Those were the first photographs I bought, and I still love looking at them.

Beginning at prep school at Episcopal Academy, continuing through my undergraduate years at Trinity College, and during my doctoral studies at Brown, I was always drawn to portraits and figurative work. For a brief period, I did research at the RISD Museum with their collection of 17th century Dutch portrait paintings. As I started collecting photographs it seemed natural that my eye should gravitate predominantly towards pictures of people.

When I began seriously collecting photographs, I spent a great deal of time looking before I started acquiring work. While a student at Episcopal Academy, I had unlimited access to the Barnes Collection next door. Thanks to Henry McIlheny, one of the pivotal collectors in the growth of the Philadelphia Museum of Art’s collection, I also had what for a long time was the only lifetime membership to the Museum. So I had already developed the habit of looking at art critically, and I brought that to my interest in photography. In addition to reading voraciously on the subject (I now have an art library of over 4,000 volumes. But that’s another story), I was fortunate to be able to visit museums, galleries and collectors all over the world. Soon, my latest acquisitions were coming in almost weekly.

There are now some 3,500 photographs stored away at an art storage facility. Nobody, myself included, has ever really seen this collection I doubt anyone will; it’s too large. However, I thought it was time to take stock of what I’ve acquired over the past 30 years and select some highlights. I’ve put together a presentation featuring approximately 350 works that represent the tip of the iceberg. Obviously, this doesn’t cover everything in my collection. I had to make choices about what to include. For months, I kept adding and subtracting to the edit. Finally, it just seemed like it was time to put a cap on it.

Two key conversations informed my collecting. John Richardson once talked about having lunch with Picasso. I was fascinated by the concept that you could have a real relationship with an artist, going beyond having an appreciation of the photograph. It was clear that in developing that personal relationship I could gain a deeper understanding of an artist’s work, and maybe have some great experiences along the way. At that point, I shifted from collecting more historical work to focusing on contemporary artists. I was particularly interested in young and emerging contemporary photographers. The market for photographs really began to take off around the same time that I started collecting. Operating with relatively limited funds, I was trying to get ahead of the wave. I moved from being solely a collector, to curating exhibitions, writing catalogues, articles, and books, to producing exhibits. Finally, perhaps inevitably, because of the relationships I had forged with different artists, I began representing them. Like many dealers before me, I was essentially selling work in order to finance my own collecting habit. Leo Castelli told me that you should always buy out of your own exhibitions. This seemed either a great way to build a collection or a terrible way to run a business (perhaps both), but I took it to heart. Consequently, you’ll see work by a large number of artists that I’ve exhibited over the years.

I have curated exhibitions at museums and galleries all over the world. For a period, I was a Contributing Editor at American Photo magazine, and a columnist for The Art Newspaper. I have authored several books on Hiroshi Sugimoto. I’ve been a professor at the School of Visual Arts, and at the International Center of Photography. I’ve lectured all over the world. I was on the Guggenheim Museum’s first Photography Committee. And I’ve operated Peter Hay Halpert Fine Art as both a private dealer and as a gallery space. Throughout this long, strange ride, I’ve always been collecting photographs.

Peter Hay Halpert is a fine art dealer in the United States with a collection spanning the entire history of photography.