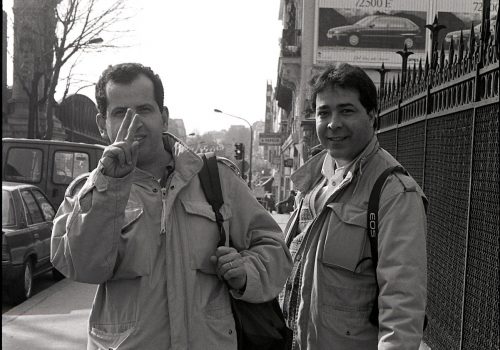 Nacerdine Zebar known as “Zinou” dies of Covid in Algiers

“Zinou” died on November 12, 2020 in Algiers hospital, victim of Covid. He was a well-known and appreciated photographer reporter on both sides of the Mediterranean.

“We called him Zinou, the Algerian diminutive of Zinedine while his real first name was Nacerdine” remembers the photographer Christian Ducasse who was one of his friends. “My memories of him go back to his arrival at Gamma in 1987 where his compatriot Mohamed Lounes inducted him. Zebar began a fertile collaboration with Gamma, going in the hollow at the root of information, in territories neglected by the staff. Patient, industrious, his commitment to photojournalism was akin to a long distance race at a medium tempo. Based in Algiers since 2008, Zebar had become the providence of quality editorial staff who attached him to their services. His relationship with current affairs made him a precious partner. Far from the news, he also liked to highlight his native Algeria with book projects, some of which were in the works. One in particular on Oran.”

The disappearance of Zebar touched many photographers, especially among the former   Gamma “staffers”. “The first time, I met him by chance in Algiers where he was doing a subject on young people. »Confides Mohamed Lounes the pillar of Gamma. “Every time I went to see my family in Algeria, we saw each other. He was a brother to me. ”

“Zebar… Zinou… We were always in touch,” said Floris de Bonneville the former editor of Gamma. “We communicated again last week…. I liked him, he was a friend with whom we could talk about everything, including politics or religion.

Photographically speaking, he was very interesting. He took great pictures of Algeria. For me he was a salesperson in two digital agencies, Foto Digital Bureau and then Global Photo, which I created at the start of the 21st century. We also tried to organize a photo festival in Algiers together, but it didn’t work out despite our efforts. His departure is a terrible blow. ”

Before finding a place at Gamma, “he started around 1985 at Imapress” recalls Pierre Menochet the former editor-in-chief of Jean Desaunois’s press agency. “He was a good, serious photographer and he worked for us in Paris for a few years, then after that he moved back to Algeria. ”

Nacerdine Zebar was born on November 18, 1957 in Sétif (Algeria), he studied at the Paris School of Photography (EFFET) and at the University of Paris VIII. He has been published in numerous newspapers such as the daily newspapers Liberation or Le Figaro; magazines like Time, Newsweek, Spiegel, VSD or Paris Match. He did a remarkable job photographing the thirty-two lighthouses in Algeria for a book “The Lighthouses of Algeria, Vigies de la Côte”, with journalist Mohamed Balhi.

In recent years, he covered the realization of the great mosque of Algiers: “The hundreds of photographs I have taken bear witness of this evolution towards consistency and how the site was already beginning to mark the entire landscape of the bay. from Algiers. It’s surprising how a building can completely change places that were thought to be unchangeable, ”he said in a recent interview. Death took him before he completed a book on “Algiers from the sky” and a project on the city of Oran.

À l’Oeil sends its condolences to his family and many friends.