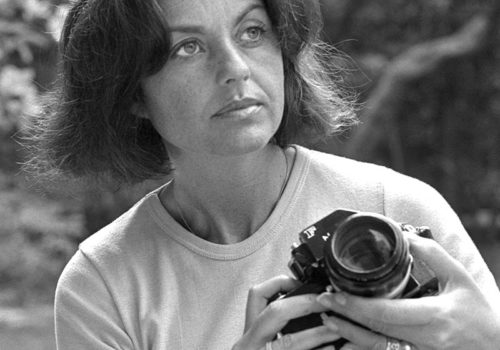 Iconic Images announces the passing of Eva Sereny. The photographer behind so many iconic images, including on-set photography from Raiders of the Lost Ark, Last Tango in Paris, Death in Venice and The Great Gatsby, passed away suddenly following complications from a stroke. She was 86.

New York – Born to Hungarian parents and raised in England, Eva’s early life took her to Italy and she arrived at the height of ‘la dolce vita.’ She married and began raising a family. It was an utterly unexpected twist of fate that set her photography career in motion. Eva’s husband had been in a car accident and as she sat with him during recovery, it occurred to her how luck was on their side, but it got her thinking. As she remembered in an interview for her book, Through Her Lens: The Stories Behind the Photography of Eva Sereny, published in 2018, “I’ve got nothing. I needed to do something. I knew I had artistic inclinations but couldn’t draw and that thought brought me to photography.”

Eva proceeded to immerse herself in photography books and built her own darkroom in her basement. After working with her husband’s Rolleiflex, she purchased a 35mm Nikon and started taking pictures of her friends’ children. A friend happened to be the president of the Italian National Olympic Committee and suggested that Eva photograph young children participating in various sporting disciplines in the newly developed Italian sporting centres. Those photographs inspired Eva to take a leap of faith and she flew to London where she walked into the offices of The Times.

She met with the picture editor who liked the photographs Eva presented. So much so, they ran in The Times soon after.

After her images were printed in such a prominent publication, Eva approached a film publicist in Rome about whether or not it was possible to shoot stills on the set of a film she knew was shooting nearby. The publicist warned that it might be difficult, as the director was very particular about photographers. Nevertheless, she got the call to go to the Piazza Navona where she spent a few days quietly taking photographs and developing them at home at night. The film was Catch-22 and when Eva shared her photos with director Mike Nichols, she was asked to stay on for the last two weeks of shooting as a paid ‘Special Photographer’.

Eva’s first encounter with Hollywood soon led to subsequent opportunities and started a career that would last several decades. Her role as a ‘special photographer’ found her on the sets of films directed by some of the most iconic names in Hollywood. From Luchino Visconti’s Death in Venice to François Truffaut’s Day for Night, Federico Fellini’s Casanova and Bernardo Bertolucci’s Last Tango in Paris. As Eva’s career gained further momentum and attention through the 1970s she moved back and forth between American and European film production, meanwhile juggling photographing features and covers for The Sunday Times Magazine and numerous other magazines, including Life, Elle, Paris Match, Marie Claire, Epoca, Vogue Hommes and Harper’s Bazaar.

Throughout the 1980s, Eva continued to work on a number of major films, including the first three Indiana Jones films: Raiders of the Lost Ark, Indiana Jones and the Temple of Doom and Indiana Jones and the Last Crusade. The immense popular success of these three films has meant that the images Eva took on location in Tunisia, Sri Lanka and Spain have become some of the most well-known of her career. Her portraits of Harrison Ford and Sean Connery graced the covers of several prominent magazines.

When asked how she captured such iconic images of the stars, she remarked “It’s how you approach people: life is about that.”

Eva Sereny’s archive is vast, not only in the number of films, but of the quality of the actors and directors; sometimes at work, sometimes in a moment of repose. Her images range from a stunning portrait session with Romy Schneider in 1971 to work with Jacqueline Bisset, Charlotte Rampling, Robert Redford, Jane Fonda, Harrison Ford, Al Pacino, Paul Newman, Mia Farrow, Elizabeth Taylor, Richard Burton, Meryl Streep, Marlon Brando, Sean Connery, Clint Eastwood, Luciano Pavarotti and images of film directors Visconti, Truffaut, Fellini, Bertolucci, Werner Herzog, Sydney Pollack, Fred Zinnemann, Peter Bogdanovich, Steven Spielberg and George Lucas. One of her most collected images is that of Anthony Quinn, in character while shooting The Greek Tycoon. Notably, Eva also photographed Audrey Hepburn in her final screen performance in the Steven Spielberg film, Always.

Eva would often speak of learning her craft by studying the great directors and cinematographers she worked with. So much so, she was inspired to direct herself and her debut short film, The Dress, which starred Michael Palin, premiered on the last day of the London Film Festival in 1984 and went on to win Eva the BAFTA for Best Short Film of that year along with winning the coveted Chicago Golden Plaque.

“Eva was one-of-a-kind,” Carrie Kania, Creative Director of Iconic Images noted. “Iconic Images began working with Eva in 2018 and assisted in publishing her book as well as staging a simultaneous retrospective exhibition in London. We are proud to say that we acquired Eva’s archive from her earlier this year. This news of her sudden passing has left us with great sorrow.” Kania also adds, “Eva’s work touched many people and her photographs were seen by so many, worldwide, in newspapers and magazines for nearly 50 years. She was a woman in a profession dominated by men and she reached the very top of her field. She was humble but fiercely proud of her work and in recent years, we spent a great deal of time pouring over her negatives. It is a privilege for us to be involved in her extraordinary legacy.”

James Clarke, writer and film historian who contributed an introduction to Through Her Lens said that “In speaking with her, what became evident was her ability to nurture a warm and welcoming rapport. It’s easy to see how this allowed her to nurture relationships with actors and directors. She clicked away and captured, at the risk of sounding a little overblown, a sense of soul. I am so grateful that I had the opportunity to meet Eva as part of the work that we did together for the book of her photographs. I had first seen Eva’s photographs in movie magazines when I was a teenager and so to have the opportunity to work with her on Through Her Lens was very special. The sense of warmth that shines through in her images was all part of her own character.”

When her book went to press, Eva was overwhelmed by the celebration of her body of work. She commented at the time, “I can’t believe it actually.” Then, with a smile, “this is like a fairy tale, isn’t it?”

ABOUT: Iconic Images represents many of the world’s most renowned photographers, creating international touring exhibitions, consigning fine art prints and books to more than 30 galleries worldwide, and resourcing luxury fashion brand collaborations and editorial image licensing to the world’s leading newspapers and magazines.

Their archives contain historic and iconic images from the frontline of fashion, rock, film, politics and royalty by photographers who were pioneers in their field. The archive includes the world’s largest collections of David Bowie and Elton John, Marilyn Monroe, Jimi Hendrix, Audrey Hepburn, Frank Sinatra, The Rolling Stones, The Beatles and Led Zeppelin. It covers the universe of Vogue fashion photography from the late 1930s to modern day swell as the world of politics from Winston Churchill and John F. Kennedy to Nelson Mandela.