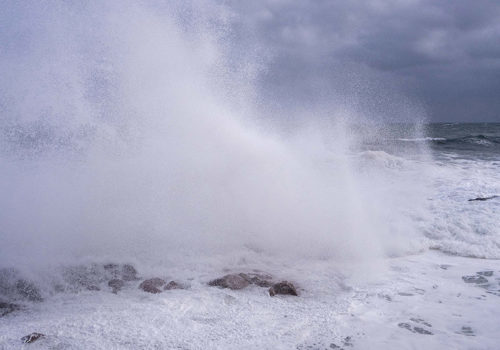 The 2021 edition of Images Singulières being as disrupted as the previous one, the activities are this time distributed throughout the year, mainly around the Maison de l’image documentaire . Meeting with the new resident artist, Hugues de Wurstemberger, Swiss by birth and Belgian by adoption, exhibition visit and feed back on a career .

The practice of residency for an author, respecting the specifications and deadlines of the order sometimes leads him to orient his work upon the very moment of starting it, providing both the frustration and the inspiring motivation inherent to the exercise. Known and recognized for his images composed of squares made with beautiful balances of black and white, it is nevertheless a gallery of vertical rectangles, in color, that the Swiss photographer delivered at the end of his eight weeks of shooting, by reserving only a few in these gray values ​​that he likes, during some light delicacies on the visited landscape. The herbarium he had in mind, even before being there, turned into a stroll through a nearby environment, and local encounters, gleaning  images around the lake of Thau, Vic and of their Palavasian neighbors, linking his series of photographs to the elements, water, earth, fire, air, the flight of birds, themselves residents of Hérault. “I have always been amazed by the flamingos, a surprising bird which resembles, in flight, a twisted concrete iron … while learning that it is a species which does not migrate any more, it remains permanently ; undoubtedly another evidence of climate change ”.

Crossing, here, market gardeners practicing agroforestry, or there, a shellfish farmer initiated in Japanese oyster farming techniques, the artist thus bears witness to a magnificent but fragile ecosystem, tamarisk, insects and these posidonia – a type of aquatic plants living underwater and growing very slowly – which are the subtitle to the book published annually by Images Singulières at Le Bec en l’air. He himself defines his work on restoring his residence “I  zigzagged  thru the landscape, trying to structure the territory, always with the initial idea of ​​making an herbarium with these environmental issues, avoiding putting people in it. And, little by little, I have met people who are very active here, involved, and who are concerned about the preservation of this region “.

The former Swiss Guard must have been disoriented, he who succeeds in showing his first images at the Elysée Museum in Lausanne, taken within the military institution itself. Work which then opened the doors to the VU agency freshly created by Christian Caujolle and Zina Rouabah in 1986. Brought up on a diet of images of Werner Bischoff, Gotthard Schuh, Jakob Tugener and of course Robert Frank,  it is the husband of his aunt , a photographer himself, who put his first 6×6 camera in his hands.

With John Vink and his friend Michel Vanden Eeckhoudt who inspired him a lot, H2W (for close friends) is part of the “Belgian delegation” of VU, and actively collaborates with Liberation and Le Monde, among others, from 1985 to 1998 – he obtained the Niepce prize in 1990 – by developing subjects in tandem with journalists like Philippe Garnier, to cover the Venice or Cannes festivals, keeping his author’s gaze dear to the members of the agency.

Along with his press publications, he  put his compositions in B/W medium format, not very popular in magazines, at the service of humanist and of associations such as the Pestalozzi Children’s Foundation and Les Amis de l’Atelier. He returned to his Swiss mountains in 1995, and also travelled a lot in Africa, Morocco, Mauritania, Zambia and Ethiopia, as well as in El Salvador, in search of this authenticity which he pursues without respite, and of the simplicity mixed with intimacy, present in “Pauline et Pierre” which observed over several years his own children.

From 2005 it was in teaching that he passed on his knowledge, at the Septentecinq, a higher art education establishment in Brussels, rather oriented towards documentary photography. The school founded in the 1970s with photographer Yves Auquier, who also led Groupe Images and who exhibited pioneers such as Lee Friedlander very early on. The lack of time, unfortunately, does not leave much room for the teacher that H2W has become for his personal work, but the compensation will be found in the enrichment provided by the exchanges with the students and in a relatively free teaching, at least. in years past, which favored human connections rather than results. Retired from the institution since January 2021, we should quickly find his attentive gaze and elegant gait on our photographic horizon.

Exhibition at the Maison de l’image documentaire in Sète until September 5, 2021