Ilse Bing : The Queen of the Leica 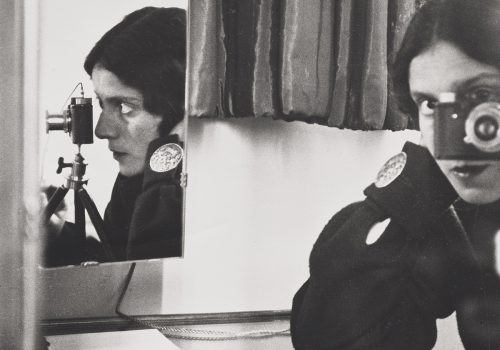 “I didn’t choose photography; it chose me,” said Ilse Bing (American, born Germany, 1899–1998). Bing was just a snapshooter until forced to hone her photographic skills to produce illustrations for her doctoral dissertation at the University of Frankfurt on an 18th-century architect. Then in 1929, on a university field trip, the 30-year-old art historian saw for the first time a painting by Vincent van Gogh. She instantly decided to become an artist—but not a painter. Photography “was the trend of the time,” she recalled later. And the newest trend in photography was the Leica, a small, lightweight German camera.

The first professional to adopt this 35mm single-lens camera, Bing brought such inventiveness and originality to the innovative technology that a critic soon dubbed her the “Queen of the Leica.” The camera’s revolutionary technical characteristics encouraged spontaneity, experimentation, and boldness. It used 36-exposure rolls, in comparison to sheet film cameras, which had to be reloaded after each shot. The Leica’s 35mm film, developed for motion pictures, offered enhanced light sensitivity. Coupled with a wide aperture lens, the film permitted such short exposures that indoor pictures could be taken without a flash. Because the viewfinder was located directly above the lens, the camera was held up to the photographer’s eye to frame and shoot. The camera’s light weight and “miniature” size were freeing, making it easy to hold at unusual angles. “I felt this small camera became a continuation of my eye which moved around with me,” Bing said.

Bing bought her first Leica in spring 1929. The following year she left Frankfurt for Paris, the center of the art world. “The moment I put my foot on the Paris pavement,” she said, “I knew it was my atmosphere.” She photographed the nightlife, amusements, and unique character of her adopted city. Her avant-garde style—verging on abstraction but always grounded in reality and sometimes Surrealism—quickly brought her magazine, fashion, and portrait commissions, as well as exhibitions. Bing approached all her work, whether commercial or personal, as fine art.

Her photographs, including a number made for commercial purposes, were written about in art magazines and exhibited during the 1930s in galleries and museums, including the Louvre and New York’s Museum of Modern Art. An example is Salut de Schiaparelli, which was published in a magazine review alongside Bing’s personal work. This commission from French couturier Elsa Schiaparelli called for a promotional image for the newly launched perfume Salut. Bing’s picture is formal yet fanciful and disturbing: while lilies, which surround the head of the sleeping beauty, may have been a component of the scent, they are also associated with funerals. The picture garnered critical acclaim, but it was never used to advertise the perfume, perhaps due to its somber mood and ambiguous symbolism.

In 1936 one of Bing’s patrons arranged for her to spend almost two months in New York City. The scale of the city made her feel like “an atom wandering in the universe,” a sensation echoed in a view of Manhattan’s skyscrapers taken from an elevated train platform. A minuscule self-portrait is hidden in the glass cover of the coin-operated scale. Bing and her work were enthusiastically received in New York. She had a solo gallery exhibition and met with magazine officials at Fortune, Time, and Life, the last of which was still in the planning stages. Despite possible employment, she returned to Paris to be with her fiancé, pianist and musicologist Konrad Wolff.

That was an unfortunate decision. Four years later, when the Nazis invaded France, Bing and her husband, both German Jews, were interned in camps in southern France. They eventually gained release and in June 1941 immigrated to New York. The reception Bing received was far colder than in 1936. One of numerous refugee artists, she had difficulty establishing an equally successful career in this new culture, especially when it was constrained by wartime privations. She ended up working mostly as a portraitist. In 1959, at age 60, Bing abandoned photography, claiming “I had nothing more to say. . . . I did not want to repeat myself.” She channeled her creative energy instead into drawing, collage, and poetry. To earn a living, she became a dog groomer.

In the mid-1970s, a renewed fascination with 1930s modernism and a newfound interest in women artists sparked rediscovery of Bing’s art. Enthusiasm for her work has remained high in the ensuing decades. This exhibition, drawn largely from the museum’s collection, comprises 50 photographs spanning her career. Most of the prints are vintage—that is, made around the time they were shot—and all but a few are on view here for the first time

Vintage prints by Bing are quite limited in number. When she fled France, the artist managed to bring only her negatives and equipment. After the war her prints, which amazingly had survived, were shipped to New York. Tragically, she could not afford the customs duty on most of them; she was forced to select a few, and officials destroyed the rest. The revived demand starting in the 1970s for her art from the 1930s led to the reprinting, under her close supervision, of her earlier images.

Even though Bing was close to 80 when she was rediscovered, she was able to enjoy over two decades back in the art world spotlight. Ilse Bing died in New York City two weeks before a retrospective exhibition that opened on what would have been her 99th birthday.

The Cleveland Museum of Art