Best of March – A tribute by Christian Caujolle to Claudine Maugendre 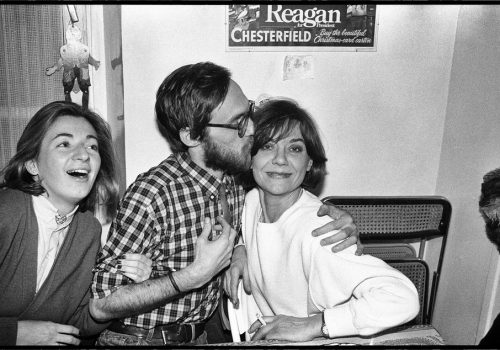 All our exchanges started like this, by this possessive, affectionate absurdity, and there’s no reason to change . You went to join, among others, Jacques Massadian, Jean François Bizet, Michel Antoine Burnier, and Léon Mercadet.  Certainly, they’re celebrating, happy to have you back, and me, I am immensely sad.  But it was inevitable that the family would rebuild itself, that the clan of 33 rue du Faubourg Saint Antoine would gather again.  You never, in a certain way, were really able to leave them.  We had a good laugh when, in 1986, at the beginning of the VU Agency, you had decided to participate in this adventure at Libération and that, at the last moment, you weren’t able, you had retreated, you had stayed at Bastille and never reached Barbès.

Yes, we laughed about it, with this resounding laugh that rang and resonated from you, recognizable to all, like your smoker’s voice that you were able to raise, and you had to do it more than once at Actuel where you were a bit like a mother, a rare woman in charge.  You left L’Express to join this alternative adventure early on, which, against a backdrop of rock, Peace and Love, and flower dresses, changed the world through our own life  You were a layout artist there before becoming photo director and, in 1979, when the magazine became “new and interesting” and wrote some of the finest pages in new French journalism, you knew, better than anybody, how to find points of view that had to be the base and accompany this way of looking at the world.  I’m thinking about “your” salaried photographers like Alain Bizos  you always defended , to whom you entrusted the creation of historic covers like the one of Nina Hagen, like Daniel Lainé whom you continuously accompanied in his quest of the last African kings and many other adventures. But I think about all those, today often well-known, whom you trusted first, assigned, accompanied, argued with, invited to have a drink in the middle of an editing, with whom you spent nights talking and watching, shaping.  Your curiosity, your ability to see how others saw differently, your generosity, your refusal of conventions gave us a French photographic heritage.  In the realm of color, among others, when the field was still deficient.  Alain Bizos, Denis Darzacq and his nights, only naming those to say how eclectic and open your tastes were.  I could really name many.

You never knew retirement, even when there was no longer a paper.  The need was too great for these eyes that saw the world and that you loved, that you loved more than anything and that you maintained right up to the moment where, dying, the press disheartened us with its total visual abandon.  At Arles, “La Nuit de la Photo” was, for you, a wonderful way to discover as much as it was a way to support. With a demanding and easy nature, with your gall and your frank way of speaking, your enthusiasm never refuted, your deliciously bad faith, your strong desire to act, move forward, show, share.  You brought these projections to Cambodia where, you are  well remembered ,  you and the Soviet Market, with  the oilcloths of which you were infatuated  .  Full of memories, so many memories, too many memories.  Those involved with the magazine, collaborations between VU and Actuel, yearly trips to Arles, parties, feasts, drinks, deep, unfailing friendship.  The feeling today, as strong as this friendship, of an era taking in water, even in our memories.  A step, a moment, important, essential perhaps.

Among these memories there is one, which I can no longer date but that goes back to the beginning of the eighties, returning there, radiant.  I no longer know what the pretext was, a Mois de la Photo in Paris perhaps, or simply the result of our unending discussions about what was happening in the world of photography, but Actuel, under your lead, had decided to publish a supplement dedicated to staged photography.  A precursory edition in which Pierre and Gilles stood along side Bernard Faucon and Sandy Skoglund and for which you had sent me to New York to interview a young artist who had made an astonishing series of self-portraits referring to B-list films and soap operas.  It was Cindy Sherman, and it was her first interview in France.  It was also, though you nor I knew it, one of the most beautiful gifts you gave to me.

To try and cauterize the sadness, I will spend time at La Maison Rouge, thinking hard about you.  There are many of your friends who are exhibiting for “L’Esprit Français, Contre-cultures 1969-1989”.

Christian Caujolle has worked as director of photography at the newspaper Liberation, created the agency VU’, teaches at the Ecole Nationale Supérieure Louis Lumière, in Paris, and is a respected writer and independent curator.