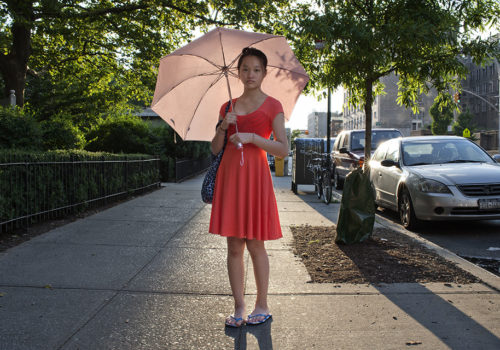 Home Gallery presents Thomas Holton’s ”The Lams of Ludlow Street”, curated by William Chan. The series, documenting the life of one Chinese family living in New York City’s Chinatown neighborhood photographed over eighteen years, is one of the most important works about the Chinese American experience. Chan selected four images to be displayed in the window gallery, one at a time. Every two weeks, passersby discover a new photograph following a chronological order.

Thomas Holton first met the Lams, a family of five, in 2003. The family lived in a 350-square-foot apartment on Ludlow Street in the Lower East Side of Manhattan. Initially drawn to their tight living condition, Holton’s earlier photographs, while true, only represented the surface. Over time, Holton became part of the family, picking the kids up from school, and going on trips with them. He didn’t always photograph them, but their gradual bond allowed for a more intimate and nuanced portrait of the family.

In the later chapters of this series, when Holton again photographed the Lams, the family dynamics were different. The images were beyond that of a family struggling with their physical space or assimilation. The children were becoming teenagers, the father struggled with consistent employment and a marriage that was dissolving. We soon realized Holton was telling a story of an American family of Chinese descent rather than a simplified essay of a Chinese family living in America.

This exhibition holds significant importance because of its location and timing. While parts of this series have been exhibited in many museums and will be included in a group show at the National Portrait Gallery once they reopen, these images have never been so openly accessible to the very community that they speak to. Representation of Asian Americans has improved since the photograph Bath Time was made in 2004; Linsanity came and went, Crazy Rich Asians was a number one grossing movie, and Andrew Yang is currently running for the mayor of New York City. Despite this progress, there has been a rise in anti-Asian attacks since the pandemic started.

At a time when many young people in the neighborhood are trying to find their place and belonging in 2021 America, Holton and Chan hope these images can contribute to conversations within the community and to a larger dialogue.

The exhibition is on view at Home Gallery in New York through June 1st. On May 20, an online exhibition of the series curated by the Lams children, now adults, will be launched. It will include their comments, a few of their own photographs, and their perspectives as the subjects of this series.