Harry Benson : The Beatles and Beyond 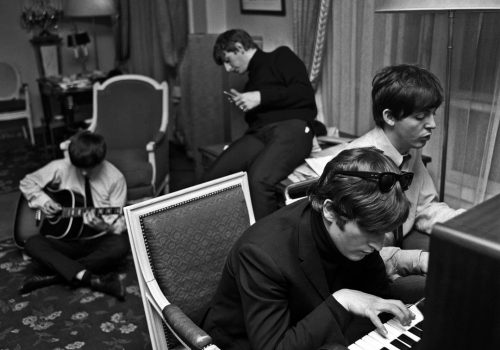 The Erarta Museum presents an exhibition by the award- winning Scottish photographer Harry Benson CBE who photographed The Beatles in 1964–1966 and covered an entire epoch of the American history, creating iconic portraits of every U.S. president from Eisenhower to Donald Trump, including icons Sir Winston Churchill, Michael Jackson, Andy Warhol, Jack Nicholson, & more.

The bulk of the exhibition comprises photographs of The Beatles with whom Benson worked from 1964 to 1966. This period turned out to be pivotal and proved the most productive and successful in the entire career of ‘the Fab Four.’ Over a relatively short span of time, the band became a global music legend, and Beatlemania swept the world. Harry followed them around, photographing their concerts in Paris where the famous ‘pillow fight’ photograph taken at at the George V hotel room became one of the most instantly recognizable images of the band.

He captured their tour of the Netherlands and Denmark, and then joined them on the plane for their first tour of the US and their appearance on television’s The Ed Sullivan Show. Thereafter Harry captured them filming A Hard Day’s Night.

The Beatles’ inaugural tour of the US in 1964 also became a turning point in Benson’s life. Deciding to stay in America for good, the photographer went on to capture an entire era in the country’s history, from the assassination of Senator Robert F. Kennedy and Civil Rights Movement marches with Martin Luther King, Jr., to some of the most important figures from the worlds of politics, cinema, music, and sports.

The exhibition at Erarta also showcases portraits created by Benson during the 1960s—2000s, including the famous Clintons’ Kiss; the Reagans Dancing; and Jackie Kennedy with a Ski Mask; & Amy Winehouse in Bed.

Benson’s photographs reflect his own personality, bursting with action, emotions, smiles, and humor. “I want photos that are spontaneous. I’m after pictures . . . that let people be themselves. I don’t want to impose on them just what I think they are,” comments the photographer.

With his energy, perseverance and curiosity, Benson always managed to collect unique material, and his reportages were the first to appear on the pages and covers of such magazines as Life, Vanity Fair, People, TIME, the Daily Express, Quest, Newsweek, and the New York Magazine.

Swift, always ready to take off and get involved in an adventure, Benson never shied away from challenges: ‘Too many photographers dance around the edges of a story,” Harry likes to say. ‘They’re afraid of the center. I go for the heart of the story the minute I get off the plane.”

Harry Benson : The Beatles and Beyond