Best of April – Harry Benson: “A good photograph can never be repeated” 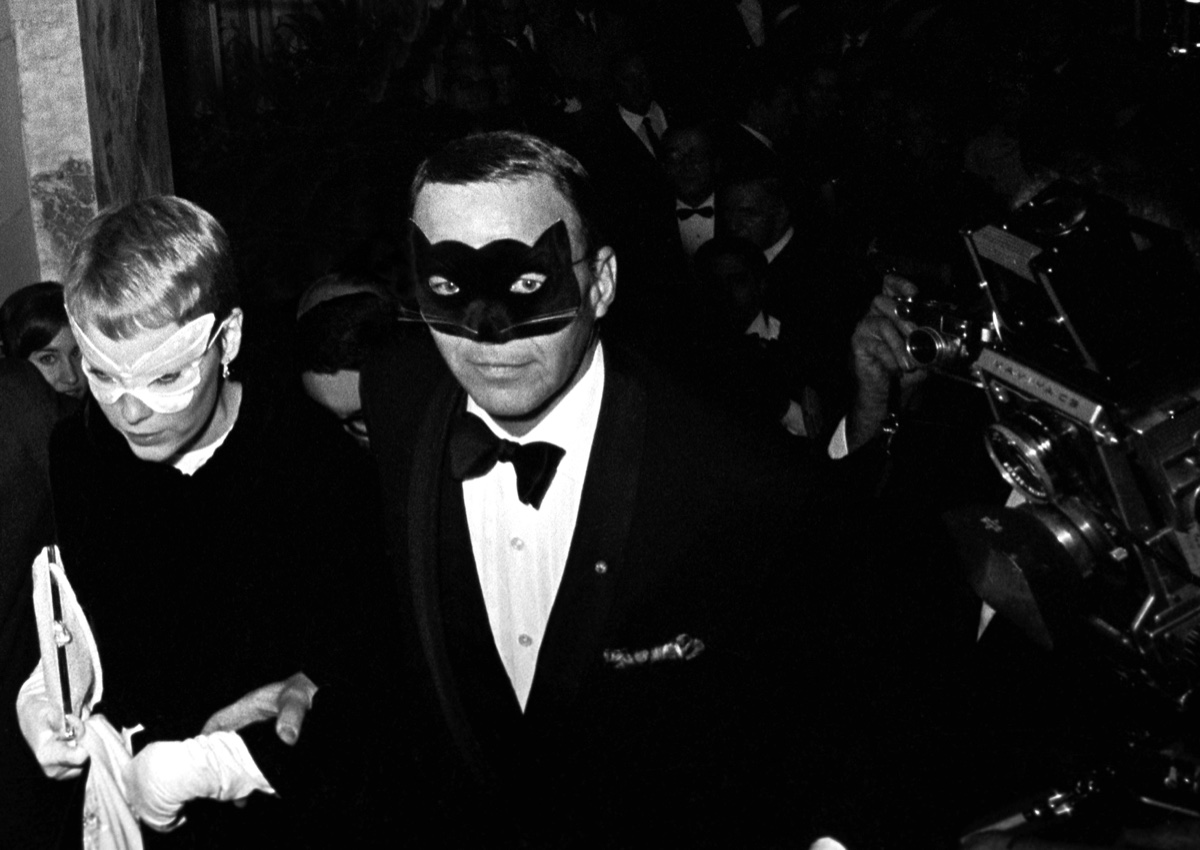 Frank and Mia, their relationship took us by surprise in 1966. Burton and Taylor seemed to have set the standard for celebrity romance, but this was so different from that — Mia, the seemingly shy and retiring ingénue, a waif, hardly the Ava Gardner type, and Sinatra, arguably the most powerful man in show biz, the leader of The Rat Pack, a denizen of Vegas after hours, often seen in the company of “persons of interest,” and twenty-nine years her senior. Their relationship had about it the elements of mystery, and nowhere is that mystery better captured than in the great Harry Benson’s black and white photograph of the two of them at the legendary Truman Capote Black and White Masked Ball at The Plaza Hotel in New York in 1966.

The picture captures an instant from which we cannot take our eyes. His gaze slightly askance, the hint of a knowing smile on his lips, he leads her, his hand grasping her wrist just above her white glove. She clutches her white purse, her eyes downcast. Her expression is difficult to decipher, but she seems vulnerable in this world of mainly men that encroaches and presses in behind her. Black and white are over determined in the image, but there is nothing black and white about it. After all, the focal points are masks, black and white to be sure, but masks are devices to conceal, and what they conceal haunts the picture.

The photograph is classic Harry Benson. With a gift for being where it’s happening and capturing with his camera the instant that says it all, he has been our witness to history. His photographs have become the way we remember. In this interview, published on the occasion of Harry Benson’s Lifetime Achievement ICP Infinity Award, the photographer articulates his approach to photography and reveals the stories behind some of his most famous photographs.

Harry, you’ve had many, many years to refine the skills of using a camera. If we think in terms of “the legendary Harry Benson,” a series of pictures from the 60s always come to mind…The Beatles shots. Can you speak about some of those pictures?

I was young and I’m amazed at how well I did it… I did it well.

Absolutely. You’ve talked about how for a photographer nothing can replace the experience of having a camera in your hand for hours and hours on the beat. When you worked for the London Daily Express it was nothing to be given four or five jobs to shoot in a day. So in 1964, when you had the chance to take the very famous picture called “Pillow Fight” — a diagonally constructed, brilliant picture — you’ve said you were ready to take that picture.

What I think you’re saying is that my work isn’t set up.

Absolutely. It isn’t posed pictures. It did happen.

It’s like the poem The Railway Carriage, by the famous Scottish poet Robert Louis Stevenson. A boy looks out the window of the moving train. He sees a farmer, then a woman hanging out clothes, then men loading cattle into another train, a passing station, “each a glimpse and gone forever.” A good photograph can never be repeated. Studio work can be repeated. The strength of photography is its immediacy. It can be living history. Studio work is never living history.

So can you tell us the story behind Pillow Fight?

I was with The Beatles in Paris, in their room in the Georges V Hotel. One of The Beatles mentions, “That was some pillow fight we had the other night.” I thought — that’s a good picture! But there was a problem; another photographer was there from our competitor, The Daily Mail. It’s a rough business, not a genteel business. Anyway, two nights later I’m back in The Beatles’ room after a show at the Olympia on the Madeleine. We’re drinking and Brian Epstein comes in and says, “I Want to Hold Your Hand” is number one in America.” Twenty minutes later he comes back and says “we’re going to be on The Ed Sullivan Show in a week or two weeks on Sunday.” Well, they were happy because they were on top and going to America, so I say, how about a pillow fight? They went “yeah, yeah, okay,” but John Lennon said “no, we’d look childish and silly. We’ve got to be a bit mature.” They all agreed. Then John slips away. Paul s drinking with his back to John’s bedroom, and John comes up behind him and whacks him in the head with a pillow. That was the pillow fight. It went from room to room and settled in George’s room.

That’s a great picture, and a great story.

And the picture is completely candid. You could not pose that.

I just let it fly. It just lined up for me.

Shortly after that you took another famous picture, which is in the Time Life Book of One Hundred Pictures That Changed the World — The Beatles taking their first steps into America. What was running through your mind?

Basically I was just trying to get them getting off the plane. I knew there would be a lot of photographers waiting for them at the airport. So I arranged with one of The Beatles to tell them to stop two steps down and turn and look at me. But they seemed to have forgotten, so at the last minute I grabbed Ringo and said ‘tell them to turn around!’

And it became this kind of picture that says anything is possible. They’re taking their first steps into a future of Beatle-mania. It’s huge.

You know, the picture was interesting at the time, and it’s grown in time, because of what it meant. But while I was in Paris with The Beatles, it stopped being a music story and became a news story. You saw that with the types of writers and serious magazines that wanted to interview them.

Because the music was so intelligent and good. There had been nothing like it.

It was the first time I think that youth culture really influenced the entire society. Everybody got swept up in this euphoria of something new and innocent taking hold.

Well, I think it was something good for America, because it was only a couple of months after Jack Kennedy’s death

I wanted to talk to you about that, too. It seems ironic to me that you, a born Scotsman, are the only photographer I know of that has shot every president and first family since Eisenhower. Can you tell us how you managed to do that?

It didn’t do any harm to work for Life magazine! They liked the idea of being in Life… and who wouldn’t?

Could you talk about a couple of those pictures?

Well, there’s Nixon’s resignation. There’s also a picture of Bill and Hillary Clinton just about to kiss… in a hammock.

It was something I encouraged. He was lying down there and he said, ‘come on,’ and she didn’t want to, but I said go on, Hillary.

Harry, one of the wonderful things about your career is that you seem to have been able to do it all. You shot great personalities, world history, popular events, decisive moments in contemporary culture. You were never a “movie photographer,” but you were often on set. Could you tell me about one of our favorite pictures, The Godfather.

So it was just something you came across and thought — this could be an opportunity?

Yeah. I didn’t even know who Al Pacino was. He wasn’t a well-known actor. I knew Diane Keaton. I thought, well, I’ll just do it. I went back the following day, but then I didn’t want to do any more, because being on a movie set is soul destroying.

You said, I think, that the picture was way over budget. They didn’t know if it would get picked up, or whether Coppola would ever work again. There’s a sort of quiet desperation to it. It’s a very graphic black and white, a very moving picture.

Thank you very much.

You’ve told me you’re very happy a lot of your pictures were taken in black and white and on film.

Black and white is the photographer’s medium. Color belonged to the painters. I’m glad my career was done on film, because with digital you don’t know how much has been manipulated.

That brings me to the final point I want to make. You shot so many generations of great photography before they could be digitally manipulated that when I look at your pictures, I feel like it’s living history.

You feel that too? Well, what you’re doing is putting your camera into an uncomfortable position… a position or a place it’s never been before. What makes a picture interesting is that you’ve never seen it before.

That ties into your theory of how pictures are made. It happened once. It was an instant. You were skillful enough, and had yourself in position to record history, and history that repeats itself isn’t as interesting to you as history that happens only once.

Holden Luntz is the owner of the Luntz Gallery in Palm Beach, Florida (USA).