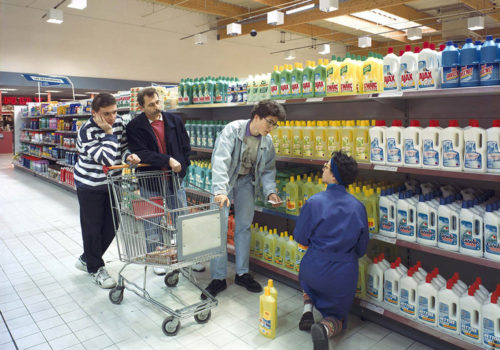 London has its Photographers Gallery and the Victoria & Albert Museum, Paris the MEP (European House of Photography), Amsterdam the Foam and the Huis Marseille (and because we only mention capitals here and that the Netherlands are a little peculiar: The Hague also has its Fotomuseum) and we could go on and on. Brussels did not have an institution dedicated to photography – a number of galleries (for example the Fondation A Stichting) yes, a hidden historical collection of the RMAH at the Cinquantenaire, yes, the activist center Recyclart, yes, but that was all.

This year the situation has changed radically: Hangar (founded in 2014 as a centre dedicated to Belgian art) is transformed into a Photo Art Centre, and how! First, there was the success of the exhibition “The World Within”, the fifth edition of the PhotoBrussels Festival and this is followed by a second collective exhibition “Regarde mon histoire / Kijk naar mlijn Verhaal” (Look at my Story!). “The World Within” talked about artists, especially photographers, reacted to the pandemic and (de)containment, with “Look at my story / Kijk naar mijn verhaal” we get back to everyday reality, to business as usual.

Central figure of Regarde mon histoire / Look at my story is the French photographer Véronique Ellena (1966). After a basic training in Nancy and Dijon, she discovered in 1986 the photography courses at La Cambre in Brussels with Gilbert Fastenaekens (1955). The latter, a former student of Inraci-Narafi, puts the emphasis on a combination of hands-on training, in-depth technical knowledge and self-expression, and all this was an eye opener for Ellena.

The exhibition presents a total of 10 series covering the period 1992-present, at least one of which has never been shown to the public before. It gives an overview of the evolution of the work, but also shows us a series of constants: the use of the view camera, the contemplative distance, the staging, the colour work, and finally also the importance of research.

Some successive phases can be established, each with its own character. In the first period (1992-2000), the emphasis is on everyday life: Ellena observes everyday existence, the small scenes, and transforms it into large tableaus by means of staging and the use of large format camera – she ritualizes the moment, comparable to genre scenes of Dutch artists of the golden age. Her approach and the precise moment in time (the 90s) involuntarily recalls the influence of e.g. Jeff Wall (1946). An influence that can also be felt in the work of contemporary artists like Tom Hunter (1965).

And then the production comes to a brutal stop: on the one hand, the loss of loved ones was certainly a factor, and the questioning of the meaning of her photographic work on the other hand forces her to introspection In this deadlock she discovered those who are convinced, who commit themselves in the broadest sense of the term. “Those Who Have Faith” (2003) series becomes a catharsis and marks a turning point in the work.

In the third phase, she turns away from everyday life and finds a new starting point in her affinity with the art history and photographic techniques. In The Landscapes (2005-2006), she reconnects with the romantic tradition of introspection through confrontation with the surrounding nature. In Les Clairs-Obscurs (2017-2018), she experiments with the glass plate, takes as a starting point an enlargement of a colour negative and begins to experiment with it. Suddenly, she finds herself “on the other side of the mirror”. In Les Choses Mêmes (2012) and Zia Maggiore (2017) she reconnects with everyday life: she no longer imagines it but approaches her parental home and her aunt’s house in a contemplative way full of symbolism.

The latest developments in Ellena’s work also represent a highlight. Between 2015 and today, she worked on the creation of stained glass windows for Strasbourg Cathedral and for installations in public spaces elsewhere in France. The works in stained glass united her affinity with art history, the use of classical photographic techniques and in-depth research.

In a later contribution we will come back to the images of Elise Corten, Hannah Van Assche, Anne De Gelas, Katherine Longly and Antoine Grenez in more detail.

Are you visiting Brussels? Be sure to visit the exhibition “Regarde mon histoire / Kijk naar mlijn Verhaal” (Look my Story!), a feast for your eyes & mind!

On the subject of the fifth PhotoBrussels Festival (PBF05) :

About previous exhibitions at Hangar :