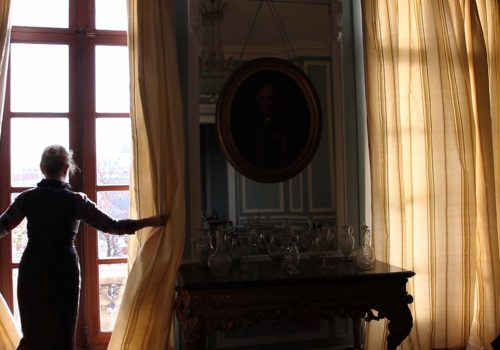 The Musée d’art moderne André Malraux (MuMa) is exhibiting, through March 18, 2018, Comme une histoire… Le Havre. It offers a wide historic view of the Le Havre area. Under the direction of the curator and director of MuMa, Annette Haudiquet, the exhibition took on the challenge of fiction rather than of scientific objectivity. The periphery, the port, the coastline, the city center, the inhabitants, the little things, and the tiny nothings are revealed through the artists’ imaginations. The exhibition is a success!

In the last few years, Le Havre has aroused artistic and touristic curiosity. From the ashes of its impressionist glory, from its chic prestige of the late 19th century blown away and covered up by the war, the city has known how to glorify the functional and urbanist architectural heritage, though starting to age, designed by architect Auguste Perret. The 2000s saw the city change, become more greatly appreciated, become an attraction again. Its theater dug into the form of a volcano, its discret charms, its port activity, and its joyous (in)tranquility are some of the features redeeming its value. Among them, the MuMa is an important player in this newfound effervescence. It sees supertankers glide by its edges, the English Channel coming to meet the concrete breakwater. Within its walls is the entire city, all its history in a few pictures, these artists who, in irregular waves, have come to visit.

The exhibition is a mix of both individual initiatives and museum commissions. Interposed and provoked dialogues are born out of the confrontation of works. Throughout the exhibition, the Hungarian photographer Lászlo Elkán, who changed his name to Lucien Hervé, intersperses the interventions of his peers with a dose of history. Fascinated by Le Corbusier, of who he was the official photographer, he immortalized Le Havre like Brazil. Taken at a low angle, the empty streets are dominated by the concrete of newly constructed buildings. In the exhibition, the contrast with Gabriele Basilico is skillfully considered. He captures the city’s urban transformations. The new buildings, their round and serial forms stranded on the city’s eternal landscapes. Winding alleys near the beach, port jetties, the immensity of the sea receding into its hollow. Basilico furthers the intention of Hervé, the latter being influenced by his fascination for modernist architecture.

To this is added Bernard Plossu. It is strange to find Plossu here! We are unaware that his lens captured a line of cars one rainy night, the end of some railway goods on a horizon of chimneys, the Église Saint-Joseph in the shelter of the moon. His black and white photography marvelously captures the spirit of the city, a walk through something strange, through something comforting.

The imagination provoked by these three photographers is directly drawn from the façades of the city, from the wide reconstructed spans joining the useful and the pleasant. Hervé, Plossu, and Basilico reveal to us a certain brute poetry, the confrontation of urban spaces with the sea’s territory, the dichotomy between human activity and deserted industrial landscapes when activity is lacking.

Brute poetry, sometimes paradoxal, between the sea and the industrial city. It is this opposition that Xavier Zimmerman emphasizes. By means of a simple mirror placed to the right or left of his subject, he shatters the common view and gives the viewer back that which is usually not seen (the off camera). His mechanism allows for a little error, which lets you dream as well as understand his complex landscapes.

Olivier Mériel has a different intention. The photographer carries around two photographic chambers, one 20×25 and one 30×40, in the surrounding area of Le Havre. He intends to freeze the city like the great Flemish masters did, offering a view of very vast panoramas where one can get lost in detail, in minuscule activities or traces of man on the environment. In his photographs marked by a play of light, where the sun pierces, where the light is hidden, Le Havre’s atmosphere and, more extensively, that of the photograph, seems immutable, reversely from the immediate contemporary.

Same story for Matthias Koch. Certainly, he is obsessed with the the city’s urban structure, as are Basilico and Hervé, but he only wants to reveal the empty spaces, the work sites, the deserted places under construction at night. With a crane, like that of a firetruck, he rises himself up and gets an aerial view of the city. Man is absent from the shots, and, paradoxically, that is his mark, his constructions, his imprint which emerges everywhere.

To those who believe that everyone forgot humanity, Véronique Ellena is there to remind us of everyday scenes with a poetic simplicity of the ordinary. Her picture Le Havre. Les amoureux de l’hôtel de ville taken in 2007 is a wonder. Two color arrangements oppose one another. The night and the city seem to be waiting for one last kiss. The work is simple, powerful. There, we linger, return, and are enchanted.

Humanity is also present through the intervention of video artists. The film Salt by Rebecca Digne, filmed with a Super8 movie camera, offers a nighttime stroll along the coast. The actors transport large blocks of salt, which has been a currency for a long time. Le Havre was one of the central points to export salt to the major European ports. Imagination sparked by the city’s past, its maritime and commercial heritage feed into a more economic reflection, as well as into strictly poetic meandering. In this work, several dimensions mix together and, at first glance, converse with the medium, then, more extensively, with the city of Le Havre.

Dana Levy’s fiction concludes the exhibition. In her work Dead World Order, a museum curator meander in an old house that survived the bombs. She takes care of her odd collections. She “preserves a world that no longer exists and perhaps will never exist again”. The subject is as gentle as it is powerful. That is the entire message of this exhibition, to concentrate on understanding how one viewpoint could capture a city, fade away in time, survive through art, and live in other spaces.

Arthur Dayras is an author specialized in photography who lives and works in Paris.