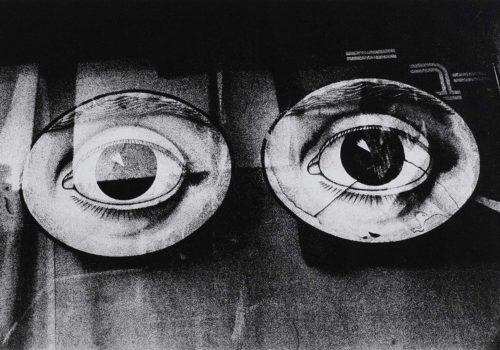 Made using deep black ink, the artworks are larger in scale, produced either as unique works or limited editions – a complete reversal to his non edited gelatin silver prints. Recognised immediately for their gritty and mysterious style, the artworks pay tribute to the multiple aspects of his oeuvre from his initial projects made in Tokyo in the ’60s to his later influences which will push his work to contemporary, international acclaim.

This year marks 50 years since Moriyama saw Andy Warhol’s silkscreens at the latter’s inaugural exhibition at the Whitney Museum in New York in 1971. The New York Times reviewed the presentation, concluding; “The plain, inescapable fact, which will give pain to his enemies, is that Andy looks better than he has ever looked before.” The same is certainly true of Moriyama’s silkscreens.

Whilst Moriyama was influenced by a variety of artists, Warhol may be the most important of these. When the Japanese photographer first discovered Warhol’s silkscreens, he was immediately seduced by the medium’s traditional printing technique, which he found to be a natural extension of his photographic language. The method allowed for repeating images ‘identically,’ creating seemingly endless variations that call the very value of our cultural icons into question. Like Warhol’s, Moriyama’s work is a response to our ever-changing relationship with advertising, celebrity culture and digital media.

Unlike Warhol however, Moriyama has always been dedicated to street photography. He devotedly, obsessively takes street snaps all with a compact camera that fits in the back pocket of his jeans. In the words of writer and curator Simon Baker,

“To me, Moriyama appears to be a person who walks around the city with his camera, glancing at things and people that interest him. Like a spark, he reacts in an instant to the city and to people. I don’t think he stares and composes an image, but rather passes by, glancing.”

When he walks down a busy street, he never stops shooting, often not looking in the viewfinder. As a result, his pictures have a palpable energy lacking in those of his predecessor, Warhol. In fact, Moriyama inherited this philosophy of movement from another American genius of the era, Jack Kerouac and his acclaimed novel ‘On the Road’ (1957). Throughout the 1960’s and ’70s, inspired by Kerouac’s story, Moriyama travelled globally and all through his home country on national highways recording his journey with a camera.

Some of Moriyama’s most iconic motifs are his images of street signs, which hint toward the Americanisation of Japanese culture and the increased eroticism in high-street advertising. Others are of mannequins, shop fronts, passers-by all taken in motion on his journey, like votive plaques of his movements through Tokyo and beyond. The silkscreens bring a stillness to the images through their scale and dynamic, inky surface. But the energy which drove them emanates from each momentous canvas.

The exhibition Daido Moriyama: A Journey in Ink will be on view at Hamiltons Gallery from 8 September to 30 October 2021.