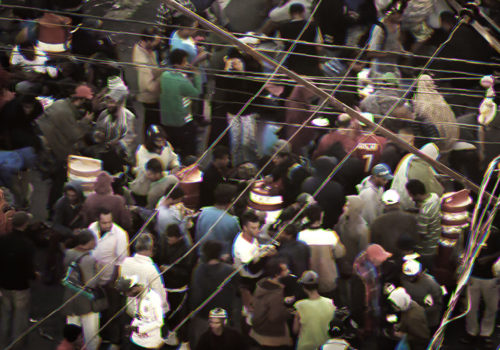 This is a pipe – Text by Cristianne Rodrigues

A piece of gas pipe, a battered old faucet, an old TV antenna: it is often in the trash that the crack addict finds something to improvise a pipe when an urgent need to smoke invades him. This greed, in Brazilian fissura, drives thousands of people every day to Cracolandia, the world’s largest outdoor crack smoking site, located in Sao Paulo.

This place which, in the 19th century, had seen the opulence of a rural oligarchy linked to the culture of coffee, is today nothing more than a ghost district in the heart of the megalopolis. Of its flamboyant past, all that remains are dilapidated mansions and the railroad that carried production to major ports in order to supply Europe and the United States at the cost of the freedom of millions of Africans.

It became a place to consume crack in the 1990s, Cracolandia, a real hell on earth, caught the attention of Brazilian photographer Gui Christ (Rio, 1980), who frequented it for nearly three years in order to document everyday life. of this lawless zone and its characters, harshly repressed by the police and stigmatized by society. But in the era of the self-portrait and the illusory podium of triumph of individuals that are social networks, who, in the depths of their distress, would really dream of posing in front of a lens?

The portable studio set up next to the public baths for drug addicts remained inactive until the artist added a sign displaying “free passport photo.” This was what was needed to break the silence, make communication possible and, with it, the emergence of intimate hopes: to find a job, to renew family ties, to quit prostitution, begging.

Bearer of an artistic and visual culture acquired at the School of Fine Arts in Rio, Gui Christ treated his subject with finesse, without obscuring or disguising this reality marked by decadence and abandonment. His second book, Fissura (2020) presents a series of portraits accompanied by these makeshift pipes photographed against a neutral background, extracted from their context as objects of scientific research. The ensemble also presents images reminiscent of 18th century Dutch still lifes with their warm and luminous colors, a nod to his pictorial references.

In a double sense, the title of the book evokes, finally, the social divide of this country champion of inequalities which has still not settled accounts with its slavery past.