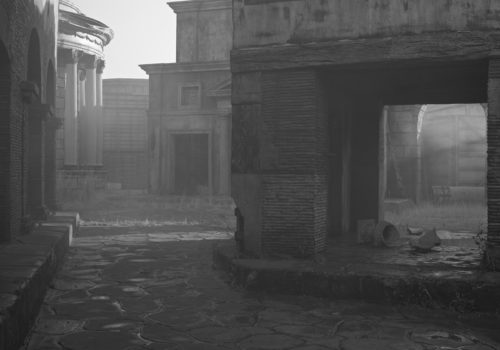 Sumatra after a tsunami? L’Aquila after the earthquake? “I didn’t give it a thought” says Gregory Crewdson, standing in the center of the Gagosian Gallery in Rome, where his exhibition will be on show until March 5th. It’s called “Sanctuary”. This famous sanctuary is depicted in forty-one photographs in grey and white, and are untitled. But they have been taken in Cinecitta, once the biggest film studio in Europe, just outside of Rome.

The images are empty and desolate, ruined. The New York photographer, even though used to staging photography shoots with lots of assistants, just like in films, has opted this time around for a small crew and not much equipment. Following Wes Anderson’s advice during the filming of ‘The Life Aquatic with Steve Zissou”, Crewdson came to Rome in June 2009 to metamorphose Cinecitta into a ghost town. From the partly torn down film sets from Scorsese’s Gangs of New York to the decors of HBO’s television series “Rome”, he portrayed the hidden side: scaffoldings and tubes. As part of his exigent attention to detail, he ordered that the weeds growing in between the fake paved Roman’s roads not be cut.

“I was struck by the beauty and melancholy of these false ruins,” explains Crewdson, as a symbol of the world around us. We are also living in a time of great vulnerability where empires collapse for good. Here, I felt protected, as if in a sanctuary. “

The studio executives were initially flattered to host a famous photographer. But after having discovered his gruesome vision, their appreciation diminished. The images refer to the history of Cinecitta and not to its present times. Built in 1937 by the will of Mussolini, the place embodies the nostalgic golden age of cinema. Out of the 3,000 films that were shot there, ninety have been nominated for an Oscar. For Federico Fellini, nicknamed “the mayor of Cinecitta ’, Studio V was almost considered his permanent residence. Charlton Heston, dressed as Ben Hur, would ride his scooter in the small alleys.

The present hardly exists compared to the magnitude of the legend. Yet the place, privatized in 1997, has changed enormously. In order to access the office of Lamberto Mancini, the executive director of Cinecittà Entertainment the company -that took over the studio it is impossible to avoid passing by the sled of Ludwig II of Bavaria used in the film “Ludwig” by Luchino Visconti. This is the only concession to nostalgia. For the rest, while keeping his finger on the remote control of his television, Mancini spends his hours in Cinecittà without regret.

“The new owners chose me because I didn’t belong to the film industry and I wasn’t a Roman,” says this 50 year old man, an experienced alpinist. These new shareholders (Luigi Abete, Diego Della Valle, Dino De Laurentiis, the Haggiag family) created the Italian Entertainment Group, a holding company that also owns the former studio of Roberto Begnini in Umbria, where he shot ‘Life is beautiful’, the former De Laurentiis’ studios in the Latium region as well as an establishment in Ouarzazate (Morocco).

With this new team Cinecitta has diversified, becoming a symbolic trademark of expertise in the field of image, film sets and entertainment in general. Half of the twenty studios are being used by television studios. Advertisement shorts are shot in the decors of ancient Rome, located a hundred meters away from the house of the fannulloni (good for nothing) from the Italian version of the show “Big Brother”.

Cinecitta sold to TV? “It’s not television that killed the studios”, protests Lamberto Mancini. “It’s the Italian cinema that doesn’t come here anymore. During the 1950s and 1960s, Italy produced almost 300 films a year and today less than one hundred. And 90% of these films are not shot here. It’s beyond our control.” The crisis in the country doesn’t help: the tax rebate available to productions that reinvest 25% of their profits in Italy are threatened by the current austerity plan.

That is why Cinecitta had to convert itself to post-production, dubbing and digitalizing. A technician can be seen restoring a copy of an old Toto movie in 3D, and another sifts through the first images of the next Nanni Moretti film ‘Habemus papam’. Everything is for sale: the brand when it comes to organizing corporate meetings in the old studios and the expertise for organizing stockrooms. A luxury hotel and offices will be built on part of the 40 acre site.

Another project: to create Cinecitta World from the mold of Disney World. A theme park that will open its doors in spring 2012 in the south of Rome. Investment: 500 million euros. The “staging” has been entrusted to Dante Ferretti, Fellini’s set designer.

The legend says that you could enter Cinecitta with a script under your arm and leave six months later with the copy of your movie. Those days are gone. While filmmaker Pupi Avati still appreciates the idea of locking himself away for a whole movie, his colleagues would pass by the studio like a gust of wind.

In 2010, Julia Roberts came to shoot a Lavazza coffee commercial. She hardly spent a day in the studio…