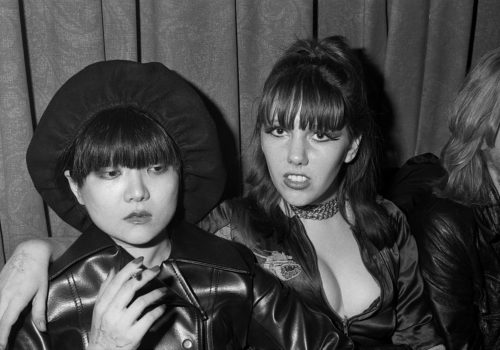 Galerie Miranda brings together two historical and little-known bodies of photography that capture urban underground culture in Paris and New York in the late seventies and early eighties.

At the time, Gary Green (b. 1956, USA) and Philippe Chancel (b. 1959, France) were both young photographers, on their first jobs and finding their footing as adults and as artists. Each of their series bears witness to the energy and spontaneity of youth – that of the artists, but also of the urban underground movements they were documenting.

In 1982, Paris, Philippe Chancel photographed the city’s rockabilly gangs composed largely of teenagers from immigrant families who sought the freedom and social integration represented by the music and clothes of postwar American pop culture, that they adapted in a kind of Parisian West Side Story.

Paradoxically, at the same time on the other side of the Atlantic, New York was plunging into deep social, economic and urban crises that were being questioned in real time by the city’s underground artists and musicians, who Gary Green photographed for nearly a decade. This ‘tale of two cities’ recounts two creative, youthful movements fuelled by music and dance – as well as violence and drugs – that were profoundly different in their composition and aspirations, whilst sharing an innate and vital resistance to crushing external forces.

The photos in Paris are particularly striking in their representation of second-generation immigrant kids drinking, dancing, kissing and fighting alongside their white middle class friends, scenes that are unthinkable in Paris today where these same social groups have been structurally and economically separated after decades of political disengagement, symbolized largely by the ghettoisation of Paris’ poor outer suburbs, or ‘banlieues’. The New York series is a raw document of the many famous but also unfamous people who forged the artistic and punk scene of the times.

For both series, the gallery has chosen to highlight the iconic figures of each movement but also the women – famous and anonymous – who played an essential role in each ‘scene’, whether as musicians, dancing partners, kissing partners, style icons, muses, bouncers or barmaids.

ABOUT EACH SERIES AND ARTIST

On the other side of the Atlantic, equally young photographer Philippe Chancel (b. 1959, France) decided in 1982 to follow and document the Vikings and the Panthers, two street gangs inspired by the culture and style of 1950s American rock ‘n roll culture, with quiffs and bomber jackets for the boys, ponytails and full skirts for the girls. Chancel was intrigued by the Viking’s ethnic mix, compared to the other street gangs, typically white and right wing. The Vikings were named after the Del Vikings, the first successful multiracial rock ‘n roll group in 1950s America, and they were allies with the Panthers, another Paris gang made up of second generation kids from the French West Indies’ colonies, taking their political cue from the Black Panther movement and their dress codes from black GIs. The Paris gangs’ ‘black, blanc, bleur’ composition (black, white, arab) was a reaction to the growing racism in France at the time: 1983 was the year when the National Front won a seat during the municipal elections, of suburban Paris, with a discourse blaming rising unemployment on immigration.

Battles between rival bands often broke out and Chancel recounts the tension that would arise as he sought to photograph both sides. Yet he also recounts the overall joyful and uninhibited mood of the time, of young immigrant kids finding freedom and acceptance in Paris through music and dance, inspired by the optimism of postwar America. He photographed the cars, the fights, the guns, the clothes, the dancing contests, the kissing contests, but also the solidarity and chivalrous codes, whereby the young women were indispensable partners, both respected and courted.

When midnight comes around

For a decade, young American photographer Gary Green was at the heart of the New York underground music scene that was rageing against a backdrop of social and economic turmoil – homicides were at near-record highs, crack was epidemic, as was prostitution. Bryant Park and Times Square were dubbed ‘Needle park’ because of the widespread heroine abuse AIDS would soon come, ravaging the population even further, as recorded by artists such Nan Goldin, Peter Hujar and others.

Gary Green hung out at the nightclubs Max’s Kansas City, CBGB and the Chelsea Hotel where he photographed some of the decade’s most iconic musicians and artists. At the time, music was everythwere in the city and key venues also included The Ocean Club, Hurrah’s, Trax and the Village Gate. “It was a rich time,” says Green, “and a small scene that was fairly easy to jump into – especially with a camera, because most people liked the attention.”

Far from celebrity portraits, Green’s pictures are unposed documents ‘from the inside’ that capture a moment in time of musical and artistic resistance to a hostile social context. Lou Reed, Andy Warhol and Joey Ramone are there, in their signature sunglasses and leather jackets, along with Alex Chilton, Joe Jackson, Tom Waits and many others. The antiestablishment ideology of the punk scene also opened the doors to women musicians such as Debbie Harry, Patti Smith, Kim Gordon; as Chrissie Hynde would comment, “That was the beauty of the punk thing: sexual discrimination didn’t exist on that scene”.

The breadth of Gary Green’s work fleshes out the iconography of the period by documenting not only the underground figureheads but also the the fans, dandies, muses, drinking partners and nightclub staff who made them famous at a mythical time built on equal parts of talent, posture and excess.

The full photographic series by Gary Green is published as When midnight comes around (Stanley/Barker, 2020).

To accompany the exhibition ‘Rebels & Dandys: Philippe Chancel/Gary Green’, French DJ Jean de Lardemelle has composed two dedicated playlists of 60 tracks each, that capture the sounds and the places photographed by Gary Green and Philippe Chancel. See the end of the press kit for full detail and scan this flashcode with your smartphone camera to access 8 hours of music on the gallery’s YouTube page: