Galerie Maubert : Payram & Adrien Couvrat : Two or three things I know about her 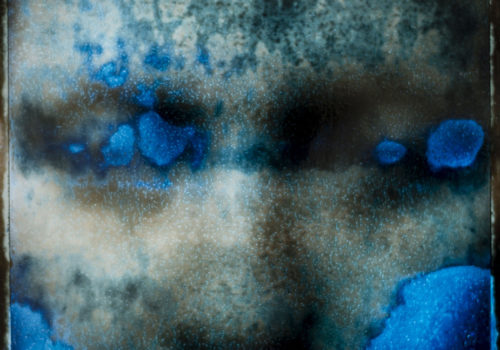 Galerie Maubert presents, Two or three things that I know about her, a duet show between the photographer Payram and the painter Adrien Couvrat.

This exhibition presents a face-to-face meeting between the works of the Iranian photographer Payram (b. 1959, Iran) and the painter Adrien Couvrat (b. 1981, France). Behind the “sfumato” of the gaze, the works surprisingly intersect in a reflection around the portrait, the image and the medium.

Payram, specialist in film techniques, offers for the first time experiments around color, using used film: black and white negatives, exposed in the 90s, deliberately unwashed, unfixed, and printed today on color silver papers. Blurry portraits emerge where shapes and colors engage in a dialogue between destruction and the construction of the image. Also for the first time, altered color Polaroid 79 transfers invite us, through portrait-bouquet diptychs in the bath of pigments to devour the representation.

Adrien Couvrat tackles portraiture in an unprecedented way, without denying his own pictorial technique which allows him to highlight his research around light and interference. He thus keeps the idea of ​​”presence”, that of the body and of a light linked to ecstasy. As with Payram, the portraits of Adrien Couvrat are linked to history: personal, of course, sometimes political, but also great History, the History of Art and in particular of sculpture. The enigmatic looks of these foreign models are portraits of agony or ecstasy (whether religious or sensual), of horror or pleasure, summoning both exaltation and lamentation. Finally, as for Payram, always close to a “vision” of light and its contrasts …

The Strength and the Fragile

“Complementary Antinomy”, such is in substance the idea of ​​bringing together two sensitive artists with so different backgrounds but whose works vibrate and reason in harmony, as if they alone were leading the dance. A dance in which the lines are lines, the colors of the universes and the sfumato of the diffuse intentions of the thought of their creator … their naked, modest and sincere emotions. At first glance, everything could separate Payram from Couvrat and yet, on the contrary, bring them together. Everything could make us love one and ignore the other and yet everything pushes us to read them each with the same attention. Everything could be so simple when everything is so much more. To look at a work is to agree to let yourself be hypnotized. Then the magic happens, or not. But when the latter sets in motion then nothing can stop it. This is the risk one takes by standing in front of a work by Payram or Couvrat. In one, the intangible fragility gives way to an unspeakable force that says so much about its author, his life and his soul, about his desires to say, to show and to share … In the other, the impact of color readily escapes the ephemeral play of light and reveals the willfully powerless mastery of these light sources, thus illustrating its mischievous perfectionist side. During many years spent masterfully printing the works of others, Payram never ceased to think of using his perfect mastery of photographic technique and its development. These two creative processes associated with an original artistic approach. have always aimed to get as close as possible to his aspirations, to all his unique and dreamlike visions. Like a pictorial chiasm, Couvrat today takes the party to reveal the others, by representing them like mirages in his compositions, those even which were exempt from any figuration. No taboos or prohibitions, the artist will continue to create according to his desires, in his more or less informal back and forth: Appearance / Disappearance. The paths of Payram and Couvrat are therefore at the same time similar and contrary, independent and complementary, poetic … interrogative. They are both part of a common creative space, where the intimate meets the universal and where life will always prevail. As long as our eyes are fixed …