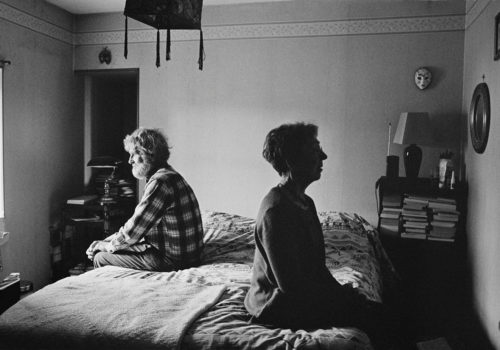 Presence/Absence is a pop-up exhibition based on the work carried out by Caimi&Piccinni during their artistic residency at the Planches Contact Festival in Deauville (curated by Laura Serani) – in collaboration with the Photo4Food Foundation.

The photographic project of the exhibition develops from the inseparable relationship between presence and absence and aims to study the links between nature and man.
Presence/Absence is constructed according to the idea of a personal, fluid, almost literary narrative, composed of images that, although having a life of their own, are episodes/points in an organic and emotional story.
This is the result of an alchemy of action/reaction, of an interaction between Caimi&Piccinni’s vision and that of a territory, the North Coast of France, which quickly becomes symbolic, sublime and evocative.

In the images we find the interweaving of human life in its present and past history, with that of nature, plants, animals, the sea and the tides. In this way, indissoluble worlds are generated, which influence each other, coexist, in a kind of gravitational system that unites empty and indefinable spaces with the intimacy of the people who inhabit them. Presence and absence overlap and their interplay, their interaction, transports us into the photographic story. The presence of the inimitable light of oceanic spaces, as well as its absence, the night and the mists of the countryside, accompany the faces on whose skin nature leaves its mark. Suspended and changing atmospheres, capable of creating an enigmatic world that asks questions without giving certain answers, renewing the tension of the unknown.
In the exhibition, this is reinforced by the relationship/juxtaposition of the images, by the dialogue that ensues, left open to give space to the viewer. To what extent does nature influence man and to what extent can man tame it?

The project has just been published in book form with the title “En Présence de l’Absence” by Éditions Bessard, and continues the authors’ recent photographic research into the relationship between man and territory, already studied in the project “Umana Natura” carried out in Umbria for the Laboratorio di Cultura Fotografica in Città della Pieve.

The project presented, “Presence/Absence”, entirely made in film, is exhibited with large and small format prints in limited series and reproductions of Super8 still images.

Jean-Marc Caimi and Valentina Piccinni, have been collaborating since 2013 on documentary and personal photography projects. Their work, focused on contemporary subjects, with a particular attention to the human aspects of each story, is internationally recognized. They have received awards such as the Sony World Photography Award in the Discovery category, the PHmuseum Of Humanity Grant, the ISPA (Italian Sustainability Photo Award), the Gomma Grant for the best black and white documentary work and the Planches Contact Grant. They are regularly featured in the press and media worldwide. They have recently exhibited at the Biennale Für Aktuelle Fotografie in Mannheim, the Festival of Ethical Photography in Lodi, SìFest in Savignano, the International Month of Photojournalism in Padua and La Chambre Gallery in Strasbourg. In recent years, their photographic stories have been published in book form by various publishers, including Witty Books with “Forcella”, Overlapse with “Fastidiosa”, André Frère with “Güle Güle” and Éditions Bessard with “En Présence De L’Absence”, the work in the exhibition.