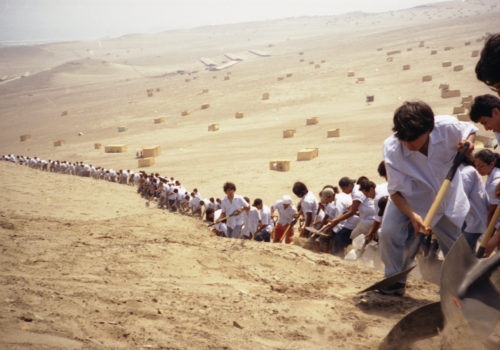 The French curator Fabien Danesi was invited by the Galerie Imane Farès to conceive ‘The Video Fortnight’, a special programme dedicated to videos works, occuring from March 10 to 20, 2021. “Each vertebra is an extinguished sun”, it’s title is taken from a line by Etel Adnan in her epic poem Apocalypse Arabe (1980).

The programme questions our contemporary world through the prism of the desert, from “Arabia to Atacama”. Here are the words of its curator, and the whole programme, combining strong and recognized works by Francis Allÿs with the achievements of young artists, deserving to be highlighted.

A word by the curator:

“When Etel Adnan began writing her Arab Apocalypse (1980) in January 1975, Lebanon was on the brink of civil war. The poetess developed a furious and profane cosmology in which the sun participates in the long chain of transformation of all things. The sun does not appear as an omniscient observer of History but is, on the contrary, defined as a primordial actor of human disasters. It participates as a gluttonous star capable of becoming everything. In a dazzling reversal, Adnan writes that “each vertebra is an extinguished sun. When I first read this sentence, I remember very well that the image of the desert appeared to me. From Arabia to Atacama, via the Great American Basin, the desert can be seen on every continent.

Too long confined to an exotic motif, it is in fact a powerful biotope where the existence of plants, animals and humans is hard won. The desert confronts us with the abstract time of tectonic formations. However, like Etel Adnan’s allegorical sun, the desert is not alien to our political condition. Thus, the films and videos proposed here show that these arid regions can play the role of a sounding board for individual or collective struggles. By expressing a real indifference to what we are going through, the desert appears as a metaphorical tool that strikingly translates the necessity we are facing: to hold on in adversity.”

For this collective performance, Francis Alÿs brought together five hundred Peruvians, who were invited to move a sand dune with shovels. This absurd gesture, doomed to fail, brings to light a singular creative act whose power is assumed within Land Art, while at the same time it resonates with the political context of the country. The action indeed took place two years after the flight of Alberto Fujimori to Japan in front of the social tensions generated by his third anticonstitutional mandate. Thus, the artist offers an ephemeral sculpture, impossible to recognize the next day, as an indication of the immense efforts that democratic work requires.

In the desert of Sharjah, a man lives alone within an archaeological site that he maintains. Sultan Zeib Khan fights tirelessly against time to preserve the neolithic necropolis from ruin. For twenty years, he has been repeating the same gestures in front of the ancestral traces of an existence that he seems to share across the centuries. Far from museums and their ideal claim to eternity,

The Digger knows that everything is a matter of duration.

Two blind men cross a steep desert, attached by a rope to a donkey. This allegorical situation becomes a true cinematographic experience where the wind appears as the one and only companion of this improbable journey. The animal and the men lead the way alternately, with no other goal than to move forward. This drifting to the point of exhaustion then takes an archetypal form, like an African alternative to the Greek myth of Sisyphus.

In the heart of Jebel Tuwaiq, Abdullah Alothman films himself within a circle drawn by microphones that capture the wind of the Saudi desert. Through an ellipse that mixes dawn and dusk, the artist confronts the elements and time in a performative gesture, reviving a Romantic perspective. The individual is inscribed in an immensity to which he is linked by the energy that crosses the world. The breath captured in all its power thus becomes an ode to life that is expressed in extreme conditions.

Two human-looking aliens meet in the desert to found a new civilization whose pillars are energy, water, mobility, biotechnology, entertainment, technology and manufacturing. Following in the footsteps of the Persian physicist Zakaria al-Qazwini, who wrote the first Arab science fiction novel in the 13th century, the Saudi artist Ahaad Alamoudi, in collaboration with the American Michael Mogensen, presents a mischievous fable in which the future appears as an unbridled speculative machine capable of deciphering the dreams of our capitalist present.

Larissa Sansour re-enacts Neil Armstrong’s first step on the Moon in the context of the Apollo 11 space mission. By planting the Palestinian flag on this fictitious Sea of Tranquility, she forcefully asserts the necessity of a worldwide recognition of the state’s sovereignty, just after the war in Gaza. She hijacks the music of Richard Strauss, Thus Spoke Zarathustra, used by Stanley Kubrick as an introduction to 2001: A Space Odyssey, to give a very ironic scope to this dream that is an epic adventure.

In Chile, the Atacama Desert was used as a concentration camp during the Pinochet dictatorship. In the middle of archaeological ves- tiges, one finds the bones of people who disappeared during these bloody years. In October 2019, at 4700 meters of altitude, Paz Corona disperses salt found on the side of the road to draw a Möbius knot to have the possibility to have these erased bodies reappear. Shot in Super 8, the film documenting her performance shows the derisory but necessary gesture in the face of the immensity of the pain and of the territory.

Aerial views belonging to the public domain are combined with David Moore’s minimal music to produce a hypnotic form in the tradition of Philip Glass or Max Richter’s compositions. The geological forms of several deserts translate an abstraction that the loops of the electric piano reinforce with the melodic repetition, like layers of drones. In this video clip, the Earth is transformed into the planet Mars under the effect of music, like the ultimate evocation of a world without water, a world without life.

In the north of Chile and Argentina lies the Altiplano, one of the highest regions in the world where canyons, salt flats and desert form a strange biotope. Malena Szlam captures on film this vibrant world where details and lights merge into each other through double exposures. The scales exchange and open on a mineral temporality, where the filmic matter seizes a universe of radiations, a cosmic world, foreign to man.