Galerie Écho 119 : Chieko Shiraishi : At the Border of Dreams 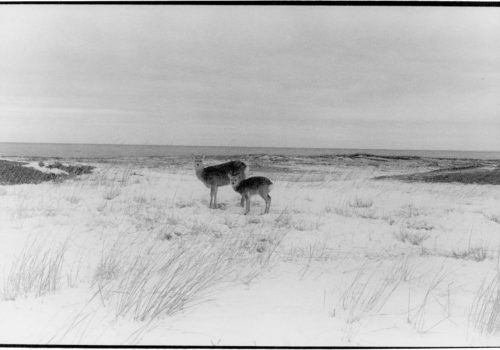 Galerie Écho 119 presents the work of Chieko Shiraishi, Japanese photographer born in 1968 in Yokosuka, Japan. A true analog printing virtuoso (she studied photography and darkroom development with Katsuhito Nakazato and Kazuo Kitai in particular), she uses this technique to better sublimate her images.

For this exhibition, we wanted to present Shiraishi’s work in such a way as to show above all what makes the specificity of her universe: poetic and deeply introspective. This is why we have brought together two of her series: Shimakage (Shadow of the Islands) and Shikawatari (La Traversée des Cerfs).

The images in the Shikawatari series, which almost appear to have been made with graphite, were taken in the winter landscapes of eastern Hokkaido (northern Japan). The central theme is a herd of deer that Shiraishi has followed for several years, sometimes from afar, sometimes approaching when possible. Seeming to be animated by their own unique space-time, the grasses, stones, clouds and wild animals stand out and then disappear in turn in the vast snow-covered expanses, frozen lakes and arid forests.

These snapshots in which the human presence is silent reveal the photographer’s wandering and her confrontation with this realm where living beings and mystical spirits meet. We find ourselves in front of the images of Shiraishi, guided by the deer, transported to the gates of this enchanted and sacred world.

The second series that we will present, Shimakage (Shadow of the Islands), is a physical, psychic and resolutely photographic journey into the heart of the photographer’s memories. We find ourselves, in her images taken in the countless small islands that surround Japan, this time transported to the border between reality and the world of dreams. Her photographs evoke the sensation of memories which, as time passes, recede and become cloudy.

To express this feeling, Shiraishi resorts to “Zokin-Gake”, a technique popular among amateur photographers in the years 1920-1930 and then fallen into oblivion, which consists of applying oil paint to the prints and then remove some of the material with a cloth.

This process, as well as her mastery of photographic printing in general, allow her to give that particular pictorial aspect that can be found on all of her prints, regardless of the method used.

Her travels to the four corners of the Japanese archipelago, from the cacti of the south to the snowy landscapes of the north, become a pretext for a photographic introspection. These cathartic images take us from the outer world to the inner world, revealing to us in turn the wonders, the darkness and the doubts that inhabit the photographer.

Her photo book Shikawatari received the prestigious Special Photographer Award of the Higashikawa Prize in May 2021.