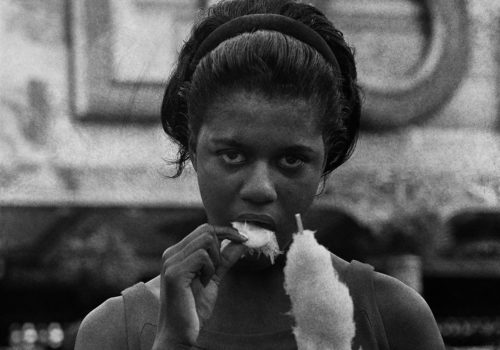 “In 1961, two years after the departure of James Barnor for Great Britain, the Ghanaian playwright Efua Sutherland and the American photographer Willis E. Bell published The Roadmakers, a book which mixes texts and images in order to draw a poetic portrait, sensitive and hopeful of a newly independent Ghana. The imaginary of the road which crosses this work, its patient construction befits, it seems to me, marvelously to James Barnor, to his personal trajectory as to his photographic career woven in a singular way between Africa and Europe, between the past and future of a profession, between individuals belonging to different worlds. Photography as a link: James Barnor, the roadmaker. Framing, shooting, processing, selecting, and today digitizing, enlarging storing dating, framing, displaying: for nearly sixty years, James Barnor has led his life around photography and for photography. This has enabled him to preserve the memory of unique individual stories, to forge links and to build, over the years, a community ready to receive his legacy. James Barnor is now more aware than ever of the responsibility that his formidable trajectory confers upon him, hoping that this in turn will inspire future roadmakers. » Damarice Amao

Following the first major retrospective James Barnor exhibition which has just ended at the Serpentine Gallery and before being presented in Switzerland (Lugano) and the United States (DIA Detroit), forty prints, gathered under the title of “The Roadmaker” are exhibited in Paris, at the Clémentine de la Féronnière gallery from November 25, 2021.

The Roadmaker presents the work of Ghanaian photographer James Barnor, whose career spans more than fifty years between Ghana and England, through the lens of a hyphenated photograph as the artist now devotes most of his time to his work, in a spirit of transmission.

A major step in France for those who wish to rediscover the work of James Barnor, the exhibition The Roadmaker highlights his work from an hyphen angle, symbol of the continuity between past and present, between tradition and progress but also links forged between generations.

At a time when major institutions such as MOMA and Tate internationally or the Quai Branly museum and the Center Pompidou in France are bringing the works of James Barnor into their collections, the gallery, after the Colors exhibition in 2019, continues its work of presenting the incredible diversity of the work of a lifetime, of which it also ensures the conservation and archiving.