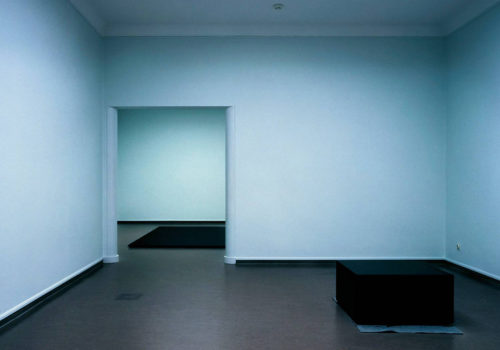 Galerie Caroline O’Breen (Amsterdam, NL) is presenting ‘Twilight Zone (The Kröller-Müller Museum)’, a new series from a larger project by a Dutch-Hungarian photographer Satijn Panyigay. The project is dedicated to capturing the empty exhibition spaces of leading Dutch museums displaying contemporary art. This series is a continuation of the previous one by Satijn Panyigay where she documents the empty Museum Boijmans Van Beuningen (Rotterdam, the Netherlands), closed for renovation, and its new depot. The Kröller-Müller Museum (Otterlo, the Netherlands) was captured vacant in between the exhibitions a twilight zone, a state that visitors don’t get to witness.

The artist is notorious for her tranquil photographs in which the emptiness seems to emphasise the absence of people. Panyigay melds and balances form and colour, rhythm and quiet, light and dark, figurative and abstract. Shot in human-made spaces, these humanless images express distinct emotions – such as loneliness and fear, or hope and acceptance – through an abstract play of light and dark. Some places are recognisable as museum rooms, but the abstraction almost always exceeds the figuration.

A light spot on the wall, freshly painted pedestals, a gaping doorway peeking into an adjoining room. In ‘Twilight Zone (The Kröller-Müller Museum)’, it is not so much what you see but the way it is presented through the specific use of radiance and dim, rhythmic lines and corners that create the feeling of tension or silence. In strict but poetic analog colour images Satijn Panyigay traces presence in seemingly empty spaces.

Satijn Panyigay (b. 1988, Nijmegen) is a half Dutch, half Hungarian photographer, living and working in Utrecht, the Netherlands. In 2010, she graduated from Hogeschool voor de Kunsten in Utrecht with the series Behind Death’s Door (photos of houses of recently deceased people, just after they had been emptied by an estate clearing company). This was the start of her photographic interest in empty spaces. In the years that followed, she was quickly noticed as a young talent. Panyigay’s work is part of such collections as Museum Boijmans Van Beuningen, Museum Tot Zover, Museum Van Bommel Van Dam, Gemeentemuseum Weert, KPMG; Reyn van der Lugt, Sgabello Collection, BlueKnowledge Art Collection and others. Recent exhibitions include a.o. depot of Museum Boijmans Van Beuningen, Fotomuseum Den Haag, Museum Tot Zover, Villa Mondriaan and presentations at such art fairs as Art Rotterdam, Unseen Photo Fair, PAN Amsterdam, Amsterdam Art Fair.