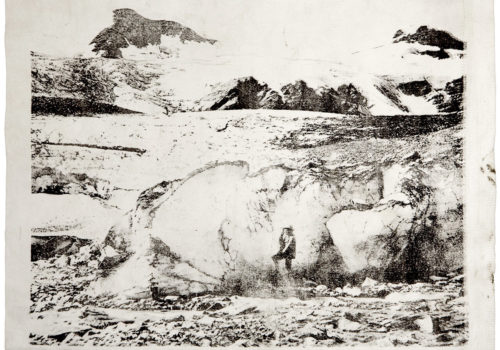 The ephemeral snows of Douglas Mandry

The Swiss artist is exhibiting his research on melting ice and global warming at the Galerie Binome in Paris. Striking photographic and organic captures that are already part of our contemporary history.

Since his childhood, Douglas Mandry has enjoyed walking the alpine trails of his native country and contemplate the magnificence of eternal snows. Naturally, by observing the world around him, he came to question the transformation of the century, that which dissolved the glaciers and saw itself called the “the Anthropocene era”, that is to say the geological period when  human being is now the first force of change in the life of the planet.

This global warming, often detailed by frontal photographic documentation, is here very delicately pointed out, with both the obvious traces of what is happening and a very beautiful visual testimony of melting ice in the very heart of the mountains.

To create his Monuments series, Douglas Mandry has collected old blankets laid on Swiss glaciers in the summer to prevent them from decomposing too much under the rays of an increasingly hot sun. He then added printed images from the beginning of the last century – some even from the end of the 19th century – , using lithography technique, of when and where the first climbers praised the places as the obligatory passage for the tourist of tomorrow. The superposition of these paintings of Épinal on the actual traces of the current melting ice underlines with acuity and a certain tragic form what we have done to the mountains. As Valérie Cazin, director of the Binome gallery, says, these covers by Douglas Mandry, because they still carry the stains of melting ice within them, are like the “shroud” of climate change, a form of shroud of a world threatened with extinction.

As if to go further in this enterprise of capturing an apparent eternal that we discover ephemeral, the artist has also just produced a series of pinhole photograms, one of the very first photographic techniques in history, in which he has dipped the photographic paper directly into blocks of melting ice. For this, Douglas Mandry built a large wooden box that he uses in the mountains, directly where he collected his photographic subject. Then he discovered in the darkroom the result of this strange capture, he manages to make colorful compositions with abstract dimensions, but which in fact evoke, on close examination, like fossil resin, called “Copal”, and which here contains not a prehistoric insect, but the scars of the earth losing its eternal snow, more exactly the breakage of a glacier which is sometimes expressed in tiny stalactites. Then comes the feeling of an obvious historical dimension, as if it were an ice core that has become the photograph of a disappearance and which makes the creative act of Douglas Mandry durably powerful with the crystallization of the extension of the ephemeral.