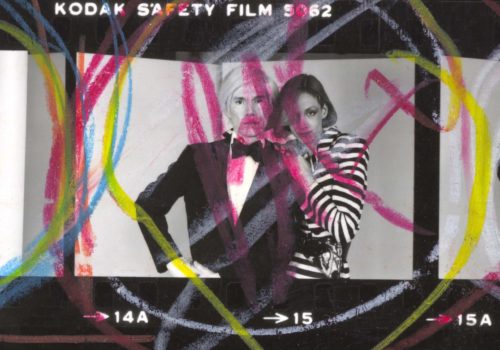 In his new book, Andy Modeling Portfolio Makos, photographer Christopher Makos offers the public the first and only photographic portrait of Andy Warhol’s early modeling career. Now a luminary in the world of photography himself, Makos offers an incisive photographic portrait of a previously unknown period in Warhol’s life as a model from the unique perspective of Warhol’s best friend and confidant. When Andy decided to try his hand at modeling, he needed a portfolio just like every other aspiring model. And this is the complete and only archive of Andy Warhol’s attempt to present himself as a model to the commercial and artistic world.

Makos’ collection of photographs clearly displays the depth of his relationship with Warhol, and how much trust Warhol placed in him to faithfully capture his image. Makos’ dynamic photographs will challenge readers to widen their conception of Andy Warhol outside of his career as an artist, and to engage more deeply with who he was as a person in his formative years.

Christopher Makos writes :
“I chose these photographs based on the content of the attitude and body language. It was not so much about lighting, technical expertise, but also about the subject matter: Andy–in this case my muse. He was already “ready for his close up,” especially when he realized he could add to his biography “model,” along with artist, publisher, filmmaker, and author.

The photo shoots here are arranged in chronological order; and the selected photographs appear in the order they are arranged on the contact sheet. This allows the view to see the progression of attitude, and how that attitude and corresponding body language developed during the shoot and in sequential shoots, as well.

I have always wanted the model to just be “themselves” for me when the session is a portrait shoot. I try to direct the subject into the light, and ask them to, “find your light,” and when know they will be able to be themselves.   And it was no different with Andy.   From 1976, when I first met him, and over the intervening years, it was that trust that we had with one another that allowed him to be himself in front of my lens.

When you’re looking at these photographs, look closely at Andy’s hands: the hands of an artist. Look at his body language.  For him, as this was a new experience, it was all about how to present himself in front of the camera. Sure, he had been photographed for years, but rarely in a focused studio setting, for a particular purpose; in this case, a modeling portfolio. He would banter that he hoped he was not taking away work from the other male models. I told him not to worry about that.

In viewing the photographs, it may initially seem that there are many that present similar poses, but in fact and on close inspection, the fact each pose was subtly different becomes evident. It took deliberate focus on both my part and his to capture and distinguish each pose. Andy was very mindful of how he held his body, where he put his hands, and the attitude that he projected for each set-up. So the resulting photographs are about his choices, whether in front of a canvas or in front of a backdrop. He was always very methodical about what to place, and where to place it.

Other aspects to examine here are the clothes, the haircuts, and the time frame of the shoot, for example, when he had just joined Zoli Models or after returning from a trip to China. The look of the last formal portraits was influenced by his new friend, Stephen Sprouse. The evolution of the portraits from the early to later clothes, haircut, and the white sneakers was certainly a remarkable transformation from our early sessions that not only indicated his changing sensibility but mirrored what was going on in the pop culture around him, too, that he was absorbing and initiating, as well..

Andy’s actual modeling and endorsement career did show promise, attested to by his work for the likes of Braniff Airlines, the investment company Drexel Burnham, Sony Beta Tapes, Pioneer High Fidelity Receiver, LA Eyeworks, U.S. News & World Report, Vidal Sassoon, Air France, (and I can’t believe this myself), Sub-Zero refrigerators. Ultimately his modeling career, which spans a complete spectrum, and mirrors his fascination with everything on which we as observers, even today, touch, read, and spend money.