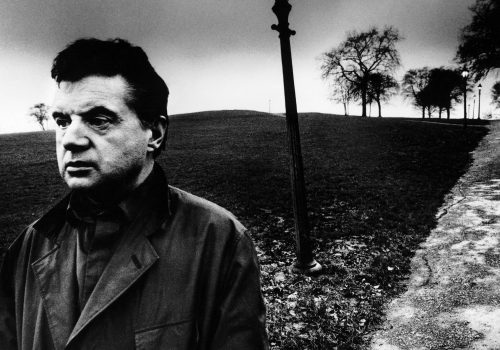 There can be no doubt about the importance of Bill Brandt within the scene of classical photography. A scene that, paradoxically, coincides with artistic Modernity. As a bridge between the experiences of the early avant-garde and the British swinging sixties, his work covers the main genres of photography, from social documentary to nude. He is, however, an author who is not often exhibited. Fundación MAPFRE has organized a retrospective about Brandt to inaugurate KBr, his new Photography Center in Barcelona. 186 photographs that summarize his best works of art.

Behind his work hides a withdrawn character, who always kept shadowed gaps in his biography, mainly during the years before he settled in England. Born in 1904 in Hamburg, for many years he claimed to be English by birth. After being sent by his family to Switzerland to be treated for tuberculosis, he traveled to Vienna, where a well-known doctor offered a novel cure by applying psychoanalysis. As one can imagine, he stopped the treatment after three months, but the Viennese life, one of the scientific and artistic centers of the inter-war years, captivated him and marked his work in which expressionism and psychoanalytical theories formed the key concept of his entire career. The photos from those years, in which he constantly moved between Vienna, Paris and London, with sporadic trips to places like Barcelona or the Hungarian countryside, can be seen as a practical exercise of psychoanalysis, a search for the hidden meaning of everyday objects.

That search continues in England, where he started working in publishing. In those days, illustrated press and books was in constant demand for images with which to fill the pages of the weekly magazines, and although Brandt was not very fond of photojournalism, the publishing world became the means to produce a powerful social portrait of inter-war Britain: a country marked by class difference, where the rancid aristocracy, with its attachment to customs and etiquette, clashes with a working class severely punished by its condition and the economic crisis of 1929.

Belonging to the upper class gave him access to everyday life in the Mayfair mansions. When the Weekly Illustrated commissioned a report entitled The Perfect Maid, Brandt went to his uncle’s house and asked the servants to pose for him carrying out their tasks. He stands out most as a photographer when taking pictures of the mine workers at their homes in the northeastern mining areas. His photos of the industrial north are one of the most intense portraits of a social model crisis based on differences. A model that was shattered by the World War.

The conflict that swept through Europe also took the Brandt as a documentary maker, who began his series of nudes in 1945. Behind this change lies a desire to be recognized as an artist and, on a more common level, a certain weariness of the world of the illustrated press.

The transition from documentary making to art is also reflected at a technical level. Brandt was looking for a wide-angle lens to take photographs inside a room. A painter friend of his drew his attention to an old plate camera sold in a shop in Covent Garden. The camera had a very short focal length lens allowing an entire room to be captured, however the price to pay was a considerable distortion of the image. Brandt knew how to take advantage of these distortions, using them to create dreamlike atmospheres in which the naked female body appeared deformed, either very large or very small, with exaggerated vanishing lines, quite similar to European expressionism of the first third of the century and the shots of some scenes from Citizen Kane, the film by Orson Welles. On one of his trips to photograph the painter Georges Braque, he noticed the rocks shaped by the waves on the beaches of the English Channel. In the KBr exhibition you can see the evolution of the photos of those rocks combined with the nudes on the same beaches. A formal investigation in which both elements, stones and bodies, are combined from the same vital shapes, finally linking with the work of artists such as Henry Moore and Barbara Hepworth.