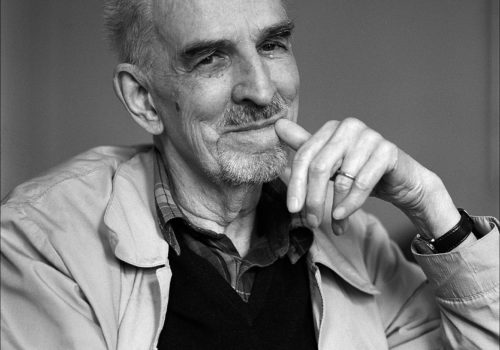 Meeting Frederick Edwin Bertin for the first time can be a rather out-of-time experience. With his gentleman education and delicate manners, his passion for the sculptors Riemenschneider and Houdon, the trios of Bach, Haydn and Mozart, the Schubert Lieders (solely sang by Kathleen Ferrier) he seems to come from another era.

“There all is order and beauty, Luxury, peace, and pleasure.”. The rhymes of Baudelaire seem to fit him perfectly and the wide and bright blue eyes which stare at you sometimes with a childlike quality may finish deceiving you about the year we live in. Everything looks easy, and that is what Frederick would like you to think.

In times when the world has gone digital, he loads his Hasselblad with films, silver gelatin, selenium toned and platinum palladium remain his only options for the photographs that he shoots in natural light.

His choices of subjects like his series on Cambridge University are not obvious still Vogue Paris gave it 12 pages. In 2005, with his “Atlantic Plants” portfolio dedicated to Brett Weston, he received the prestigious Hasselblad Master Award.

How does one decide to become a photographer? Well, there must be as many reasons as there are photographers even though for Frederick’s generation Antonioni’s Blow Up became a staple for the vocation.

His story is more peculiar. In his own words:

“In 1977 I became blind within few days. My corneas dried like Autumn leaves and shrunk. They were almost about to fall until I escape from a Parisian hospital to London. But I needed all the experience of Professor Bary-Jones and the most caring treatment of Moorfield’s Eyes’ Hospital nurses to step out three months later, safe and cured, greedy to see, to look, to watch.
I went for a walk to Hyde Park with a nurse. It had just rain on the Autumn trees. Suddenly the sun lighted up all the leaves of the park in fire. It was a miracle. It was just so beautiful after all those weeks in complete whiteness. I decided that very instant to become a photographer.”

The portraits of Ingmar Bergman and his cinema and theatrical team were mostly taken at Dramaten (The Royal Theatre of Stockholm) between 1998 and 2001. Bergman is another passion of Frederick and the series seemed a natural choice. It proved to be a long journey.

For 3 years, he approached one after another the talents that surrounded and worked with the legendary director, the actors, directors of photography, producers … to the wig maker. One photograph after another, the series built with Bergman aware of him but gently denying the photographer the encounter he was longing for.

After 3 years and 24 portraits, finally, Frederick met with Bergman who first asked him how was named the top floor of La Comédie Française in Paris. “Le Paradis” he replied. Another photographer might not have been familiar with the reference to Marcel Carne’s masterpiece, but not him.
He says: “I am fairly sure that if I didn’t know the answer, he would have kicked me out of his office, quite rightfully.”

The essential portrait to series was shot, showing an amused Bergman. Bertin remembered that Helmut Newton declared that he was ready to do everything and anything for a good portrait, as he stated “like an old whore”. Frederick continues: “At Vogue, at Cambridge and at the Dramaten, I was just a young whore, but already with some kind of skills.”. Words of a true gentleman.

The portraits series is a tribute to Frederick’s father who at an early age opened his son’s eyes to art in general and to the film of Bergman in particular. The Bergman series has been highly acclaimed, among others by the Deutsche Kinemathek – Museum für Film in Berlin – an important collector of Frederick’s Bergman portraits.