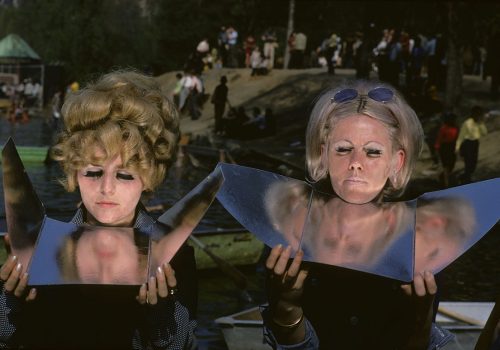 To thwart any nostalgia, Frank Horvat chose the color to photograph New York. In twenty Fine Art prints, he describes the irresistible attraction of the world city, its exuberance, its truth.

Color is not a break for Frank Horvat. Nor is it inevitable. An experiment ? The word is correct if you listen to what he says today: “I photographed in color without thinking too much about it. The color itself didn’t motivate me, but I took it into account, I’m not like Saul Leiter, whom I admire, an involved colorist. ”

Why not have chosen black & white to face New York in the middle of winter? Frank Horvat wanted to thwart nostalgia. And the already seen, his pet peeve … “My concern was, if possible, to avoid repetitions and the blue flower style. I wanted something new, that’s why I preferred the bad seasons, winter or summer, when it was too cold, or too hot. It had to be uncomfortable, nothing happens on a bright spring morning ”.

This is one of his strengths, this lucidity which he has already tested in fashion or in landscapes or in the face of Degas’ sculptures, without giving up his passion for reporting. Hence his New York, up & down, between skyscrapers and underground passage, exhilaration and depression, almost in apnea, as if he personally stood up to the city-world. Horvat vs. Big Apple?

“I deeply love New York, I feel at home there, even if this metropolis does not make gifts. Everything is cash, filled with a certain brutality, and I like it. There is also this exuberance, impossible to look at everything, you have to retrace your steps, and that’s what is beautiful, this unexpected profusion, like Pollock’s painting. ”

What connects Horvat to New York are these strangers randomly encountered by subway stations and the streets of Manhattan. He didn’t talk to them, he took them on the fly, immobilized, framed. None of them resisted this unexpected transplant, they appear welded to reality, they are consenting extras. “I have not encountered any hostility”, specifies the photographer, who does not eliminate the emotion, “necessary and inevitable”, from which he abstains from taking pictures: “Photographing allows you to get out of feeling ”.

More than the quest for faces or situations on the razor’s edge, what he is looking for is “the correctness of the composition”. Or this sign of distinction sometimes invisible at first glance, but which anchors the scene in its natural environment. The photo owes nothing to jet lag.

You can see that with the color that irrigates New York endlessly. The old lady with arched eyebrows. The Dalmatian awaiting his master. Graffiti. The balloons. The freshness of snowy roofs. The loneliness of subway passengers. Each time, with each tone, begins a story that inspires the imagination because Frank Horvat has this ability to suggest the off-screen, his photo has no end or border. From there comes the strength of his 80s New York, its depth, its truth.