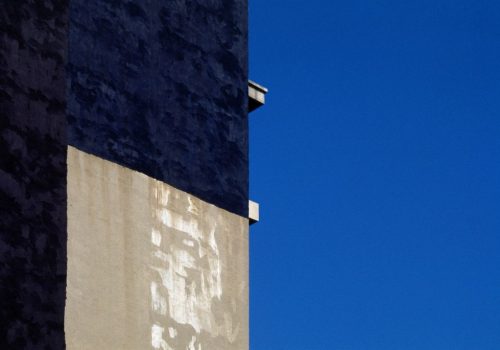 The deep and shimmering colors picking up the calibrated geometric shapes of the photos by Franco Fontana, are on stage in Modena. Sintesi (Synthesis) is the title of the retrospective that FondazioneModena Arti Visive hosts outlining more than sixty years of the artist’s career and exploring his relationships with some of the most well-known photographers of the 20th century.

Paolla Sammartano: Since the color is kind of your “signature” and one of the most immediate indicators of your style, what would you think about its aesthetic and expressive significance?

Franco Fontana: Firstly I would like to emphasise that shooting in color in the ‘60s was “more difficult” than using black & white. It was almost as if art photography included only grayscale images: indeed b&w helps to be detached from reality. As for color, what you see is colorful and has to be reinvented, because the color itself must turn an object into a subject. If it remains merely an object, then I think the film, and not the photographer, is managing the color.

PS: How do you reconcile the concrete and the abstract?

FF: Abstraction doesn’t exist in photography. You can find abstraction in painting, for you have a white paper and no matter what you draw on it, it’s invented. On the contrary, the camera lens records something real. The photographer’s thought is abstract, but its recording refers to reality, because if I take a photo of some little coloured squares, the picture looks like an abstract, but the lens is recording the reality of these little squares. For instance, the famous Pepper by Edward Weston – a masterpiece – is not a mere photo of a pepper. The pepper is just a pretext. Photography itself is a pretext, for what you take picture of is a part of you, interpreting creatively the subject.

PS: What’s the connection between color and creativity?

FF: I think you need color to understand creativity. It’s not an arbitrary creation, instead it’s a physiological sensation, psychological interpretation, emotion. Art and photography show already known things, but in a different way, first and foremost with regard to color. Indeed, what you know (and see) of the world you live in is color: you must re-invent it in order to show, as the color becomes the very subject of photography, it is not a mere recording of a certain wavelenght.

PS: What about the importance of style?

FF: Photography has to be freed from dependence on what you see, as it is creative, like poetry or music. But a style can be seen in it: Henri Cartier-Bresson had his own style, Luigi Ghirri has his own too, like any writer or musician. Obviously I also have my style. And if a style exhists, then this means you managed to show that invisible that make you tell “these landscapes are the ones by Fontana”. Your style defines you.

Sintesi consists of two sections. The first one, curated by Diana Baldon, is on at Palazzo Santa Margherita and Palazzina dei Giardini. Including thirty artworks created since 1961 to 2017 (most of which were never exhibited previously), this section provides the synthesis – evoked in the show’s title – of Fontana’s artistic career. It includes urban and rural landscapes, from Modena to Cuba, China or the States, offering examples of the photographer’s signature style.

According to the curator, “His bold geometric compositions are characterised by shimmering colors, level perspectives and a geometric-formalist and minimal language” give significance to forms, obscuring the a straight representation of reality. “By adopting this approach during the 1960s, Fontana injected a new vitality into the field of creative colour photography for then multicolor was not in fashion in art photography”. But Fontana appreciated the avant-gardes arts and was already in tune with an architecture that increasingly went towards building design based on a multicolored system producing a particular aesthetics. “The way Fontana shoots, dematerializes the objects photographed, which loose three-dimensionality and realism to become part ofan abstract drawing”.

The second section, at MATA – Ex Manifattura Tabacchi, curated by Fontana himself, presents 120 photos from the collection of 1.600 artworks the artist donated to Modena City Council and Civic Art Gallery in 1991 and now managed by Fondazione Modena Arti Visive. It highlights the close relationships Fontana fostered with some of the greatest names in international photography. Photos by Gianni Berengo Gardin, Mario Giacomelli, Luigi Ghirri, Josef Koudelka, Arnold Newman, Sebastião Salgado, Annie Leibovitz, Irving Penn, Aaron Siskind and Agnès Varda, to name but a few, are on display, offering an insight on 20th century photography.

Franco Fontana. Sintesi has been produced in collaboration with Fotografia Europea festival of Reggio Emilia, the theme of which in 2019 was ‘Connections: Intimacy, Relationships, New Worlds’. The exhibition is accompanied by a catalogue published by Franco Cosimo Panini.