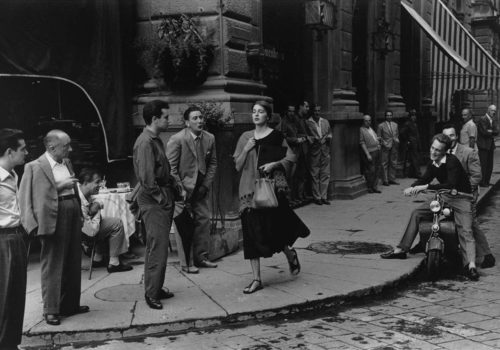 Ruth Orkin : Expressions of Life is a celebration of the artist’s centennial, featuring some of her most renowned photographs: American Girl in Italy (1951), Bernstein in Green Room, Carnegie Hall, NYC, (1950), and Einstein at Princeton luncheon, NJ, (1953), among others.

Ruth Orkin (b.1921, Boston, MA; d.1985, New York, NY) was a photojournalist and filmmaker who documented the gestural nature of human expression. Her photographs became time capsules of the emotion, movement, and empathy of her subjects, with a keen eye for capturing the pure essence of life.

Orkin grew up during the Golden Age of Hollywood, and became the first “messenger girl” at MGM Studios in 1941. Her interest in cinema led to a brilliant approach to photography, as she shot sequentially, creating strips and narratives of strangers experiencing magical moments in seemingly ordinary everyday life.

Expressions of Life is an emotional, inspiring, and romantic chronicle of Orkin’s career, featuring landmark photographs from her work across Hollywood, New York City, Israel and Italy. The exhibition portrays her observations of the human spirit in various urban dynamics – from photographs of her monumental cross country bicycle trip at age 17 and behind-the-scenes of MGM Studios, to European adventures and spontaneous, cinematic New York City moments – and confirms Orkin as a master of intimacy, warmth, and boldness behind the camera.

Ruth’s work brings the notion of touch to the most contemporary level during a crucial period in time. Her photographs capture the realness and beauty of the ephemeral moments of human touch, of which a global pandemic has deprived us from. Her camera rendered eternal the subtle instant of a hand reaching tenderly out to caress a lover’s back during a day at the beach, or an audience moved by a concert while lying close to one another on fresh grass. Quotidian embraces have become rarified and New York has been called out for becoming a ghost town, but Ruth reminds us of the cinematic qualities of the city; of the beauty in the wait time before traveling, of the collective sighs at a concert, of the intimate act of kissing in public.

This exhibition is curated by María Sprowls Cervantes, Exhibitions Manager of Fotografiska New York, with the generous support of Mary Engel, Director of the Ruth Orkin Photo Archive.