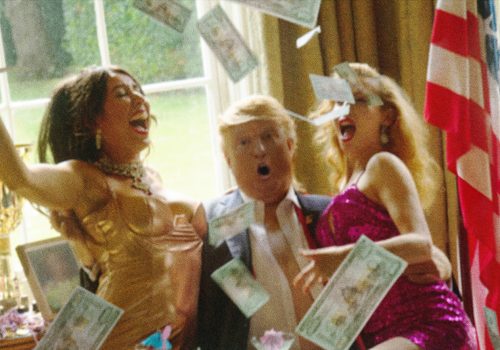 NeueHouse, the private workspace and cultural home, partners with the museum of photography Fotografiska to present the National premiere of Truth is Dead – an exhibition by the multi award-winning artist Alison Jackson.

Opening to the public on Friday November 20th at NeueHouse Hollywood, Truth is Dead presents a witty commentary on popular culture with documentary-style photographs of the intimate, often salacious, imagined private lives of many of the world’s most famous and infamous ‘icons’ or well-known individuals.

In this new show, BAFTA Award winning Jackson cleverly uses actors and employs look-alikes of celebrities and public figures. Donald Trump, the British Royal Family, Brad Pitt and Angelina Jolie, Kim and Kanye West and David and Victoria Beckham are just a few of who’s featured in the exhibition.

The works of Jackson rest on the more radical thesis about celebrity culture fascinating us simply because it is an invented reality: a simulation or hyperreality where the very definition of the real has become something entirely possible to reproduce. It is her interest in celebrity culture as simulation which shapes the works. Her photographs, she contends, are not ‘fake’, but replace the real or a stress-test of ‘truth’, but as ‘real’ as anything else in the strange hyperreal world of celebrity culture.

Alison Jackson said: “2020 has revealed to us all that “real” celebrities are struggling to be relevant and remotely useful in today’s COVID society. It’s painfully obvious to me that many public figures are missing the deep shagpile of the red carpet, the bright lights shining on their every move and the money from “influencer” campaigns. But the question has to be, will they ever return to our interest when this pandemic is all over? Or is 2020 the year of extinction of fame? For years I have been replacing celebrity for the real. Is that where we all are now? Or are we all desperate to get back to the celebrity dominated culture.”

Josh Wyatt, CEO at NeueHouse said: “We are delighted to host the national premiere of Alison Jackson’s Truth is Dead exhibition in the iconic Studio A at NeueHouse Hollywood. This controversial show is another brilliant example of thought provoking and confronting art work for our NeueHouse Members and the creative community-at-large. We hope this exhibition questions, provokes, and stimulates discourse”.

“The truth is dead. Nothing that we are shown can be trusted, everything can be faked and nothing is authentic. What does this knowledge do to us? What does it do to our outlook and how we perceive each other? I want to highlight these issues. And to do that I use humor and the human desire to, in moderation, get a peek behind the public images of the celebrities we assign such great symbolic value,” says Jackson.

The exhibition of more than 60 portraits takes NeueHouse’s members and the public on an exclusive journey designed to question one’s belief in representation and truth. Truth is Dead is safely accessible via online ticketing and by appointment in Studio A at NeueHouse Hollywood.

Alison Jackson is a BAFTA and multi award winning English artist whose works have attracted extensive TV and press coverage. She trained in London at both the Chelsea College of Art and Design, and the Royal College of Art, and has subsequently worked across many media and arts platforms: in television, film, theatre, digital, books, opera, and commercial advertising. Her photographic portraits, life-like sculptures, films and videos have been exhibited in numerous galleries, museums, art fairs and public collections worldwide including Tate Modern in London and Centre Pompidou in Paris.

A package with tickets and pre-fixe three-course meal served at NeueHouse’s Hollywood Table Terrace restaurant will also be available.

All tickets can be purchased at: rsvp.neuehouse.com/truthisdead