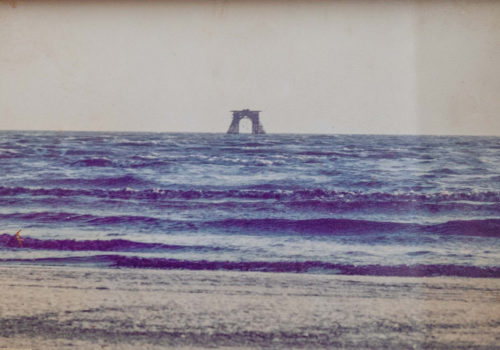 THE EYES OF EARTH  tells a deeply personal story about the environmental disaster at Lake Urmia as seen through the eyes of Solmaz Daryani, a self-taught photographer, who grew up on the lake. Her grandfather ran a lakefront hotel in the tourist port of Sharafkhaneh and her uncles were sailors. She spent her childhood summers with her grandparents on the lake and, less than a decade ago, her grandfather hosted dozens of people every day. It was the disappearing lake and faded childhood memories that induce her to take the camera and start documenting what was left of the largest lake in the Middle East and the second largest salt lake on the planet.

“Goodbye,” I said, addressing the portrait on the headstone. I closed my eyes. Though many women are buried in the town’s cemetery, she is the only woman whose gravestone has a photo.

My grandmother was an orphan and had a hard life but she broke barriers and made her own way. She was not just the dear wife of a prosperous and kind man. She didn’t wait for her husband to deliver her hopes, like many other women of the village. In times of duress and difficulty, she rose from the ashes of patriarchy and poverty.

Named after a flower, Narges (Narcissus), she had a special bond with trees and her environment. The more than 800 trees that she planted during her life testify to her deep love for nature. She had many hopes when rooting out weeds or sewing the torn curtains of the guesthouse she and her husband operated. The future for her was in her hands, in what her hands would make. Those thousand-year-old hands, hands that worked every day, took their identity from the gaunt face that honoured life. The same portrait glimmering like a candle in the town’s cemetery.

I am travelling down memory lane and recalling life in a house built out of my grandparent’s hard work. The guesthouse they ran in the lakefront town of Sharafkhaneh was surrounded by handcrafted boats and hosted dozens of tourists every summer day.

I remember my childhood there, in a yard shaded by grape vines and cherry trees on Lake Urmia’s shores. I still remember the moment during migratory season that a wounded pelican dropped down in the yard. My grandmother bandaged the freightened bird’s wings and took care of it until it healed. Then my uncles, who were sailors, took the bird out onto the lake and released it.

The lake was a popular destination in hot and humid summers. A place where bathers immersed themselves in the saline water and smeared their bodies with its legendary black mud. I still remember the sound of the waves, the chatter of beachside vacationers, the sulphur smell of the dark mud, the salty breeze in the mid-afternoon heat, and my grandfather’s overworked hands as he gave me ice cream.

My childhood in Sharafkhaneh port passed long ago and the lake has changed since then. As Lake Urmia dried up, local tourism and agriculture suffered. Like so many buildings in the area, my grandfather’s guesthouse now lies in ruins. The port town is now a sparsely populated village of elderly people, as young people flee for nearby cities Neither the town nor the salt lake resemble the place of my childhood memories.

Lake Urmia’s vanishing is much more than an environmental tragedy. It is an emotional wound in people’s memory. For those of us who remember what this place once was, the lake is much more than a receding blue spot on the world map. It is a part of our identity, and we can only hope that it does not vanish forever.

The book is designed by Portuguese designer Joao Linneu. The photography is edited by Manoocher Deghati who also spent his childhood summers on Lake Urmia some 40 years ago. A personal essay by the photographer and a short text of some of Deghati’s memories provide personal narratives that reveal the intimate relationship between this human community and the ecosystem they depended on. Introduction by Masoud Tajrishi, director of the planning office of the Lake Urmia Restoration Program.

The book will contain 112 pages, 45 color photograph and 19 images from the Daryani’s family archive.

“The Eyes of Earth” is dedicated to Narges Qasempoor, Solmaz’ grandmother. An illiterate woman who knew the importance of balance between humans and nature and managed to plant 800 trees during her lifetime. She died from Covid-19 during the process of creating the book.

Link for pre-sale the book: http://fotoevidence.com/books/the-eyes-of-earth-by-solmaz-daryani