Figures of Freedom – Portraits and Tattooing 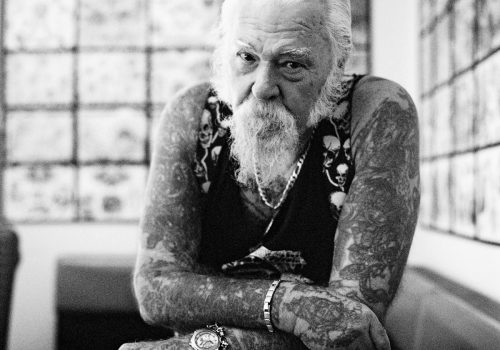 Tattoos are everywhere – on TV, in museums, on billboards, in football stadiums, on one’s little niece’s Barbie doll and on a neighbour’s arms. Photographer Dom Pichard – pseudonym P-Mod – travelled the world for more than a decade to capture the faces of those who matter in the tattoo world. Dom took a front row seat to witness a marginal subculture morphing into an everyone’s consumer choice.

In 2007, following a decade long career in a photo lab threatened by the advent of digital technology, Dom became a portrait photographer. He focused on music and tattoos, forms of cultural expression intimately connected by their contemporary relevance. Dom learned to work quickly and intuitively as he immersed himself deeply in these counter-cultures, with the desire to document the intrinsic value of the work of tattoo artists, and to offer the uninitiated a vision of a new world that was rooted in reality.

In 2009, Dom started ‘De chair et d’encre’ (‘ of Flesh and Ink’), a series of square black and white portraits of tattooed people from around the world. Industry pioneers and performers, creators and activists faced his camera to help him document the art form’s countless facets and to help explain the contemporary tattoo scene’s Zeitgeist. Inspired by the portrait-maker approach of photographer Denis Rouvre, Dom bypassed perilous generalizations of the sociology of tattooing or the tattooed person’s alleged stereotype, by focusing only on the gaze. He used a Hasselblad, a legendary analogue camera developed by NASA in the early days of space conquest, that he’d found ten years earlier on an autumn Sunday at the Benfeld flea market in Alsace. Dom only used the retro, heavy and expensive device to capture “the people who deserved it“. This series of images became ‘Figures libres’ (‘Figures of Freedom’).

The anthropologist Claude Lévi-Strauss described the body as “a surface waiting for the imprint of culture“. Despite tattooing having entered mainstream consumerism, permanently marking oneself remains a powerful tool for self-assertion.

In the summer of 2012, I began to accompany Dom on his travels and we embarked on a new series reportages on the space tattoos occupy in societies in transition. Rather than focusing on the reasons that drive people to tattoo themselves, which are numerous and personal, Dom and I set out to understand who the tattoo artists  and tattooed people in this global community were and how the choices they made were part of their personal or collective identities.

It has been a long journey punctuated by incredible adventures, seminal encounters and visual surprises. Over the years, we identified the same phenomena across continents and cultures – increasing professionalisation, feminisation, expansion… ‘Figures libres’ is a travel narrative of more than eighty portraits taken in Europe, America, Asia and Oceania, created while working on assignments for niche magazines. We hope that our unique perspectives contribute to the identification of the emergence and the currents of this industry as a cultural tradition in its own right and as a subject for political, philosophical and ethnological research.