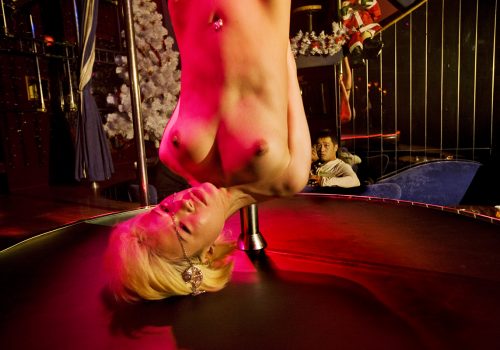 This year’s Festival La Gacilly-Baden Photo in Austria features two exhibits by photographer Gerd Ludwig, titled, “The Long Shadow of Chernobyl” and “Moscow – Winds of Change.” Beginning his career in Germany, Ludwig, who now resides in Los Angeles, is a documentary photographer focusing on environmental issues and the former Soviet Union. Both themes converge in his decades-long documents of the aftermath of the Chernobyl disaster, ranging from images within the dilapidated, highly contaminated Reactor (having ventured deeper into the reactor than any Western still photographer), to disturbing images of abandoned dolls and gas masks, rearranged by tourists visiting the Exclusion Zone.

His second exhibit highlights his expansive 30-year coverage of the rapidly evolving metropolis of Moscow.

Ludwig’s portrayal of the former Soviet Union is deeply rooted in his upbringing in post-World War II Germany. As a young refugee child, in the darkness of a cramped space that served as a kitchen, bedroom and living room in one, he listened to the sad and soothing voice of his father, a German soldier who survived Stalingrad. The perceived bedtime stories recalling winter landscapes, soldiers battling their way through blizzards and fearful people hiding in stables and barns were his father’s attempted to shed himself of the terrible memories of war. As a teenager, Ludwig became painfully aware of the suffering Germany had inflicted on the world. Stricken by generational guilt, his lifelong focus on Russia and the former Soviet Union became his attempt to discern the past.

For decades, Ludwig was National Geographic’s main photographer documenting life in the former Soviet Union, focusing specifically on socioeconomic and environmental issues in Russia, Kazakhstan and Ukraine. “He has the eye of a fine-art photographer, and is always looking for an oblique viewpoint,” shares writer/editor Reuel Golden. “Many photojournalists come to a slightly clichéd view of Russia, and photograph the country in stark monochrome. Ludwig takes a more bold and colourful approach, which makes his subjects appear more human, less one-dimensional.”

The Festival La Gacilly-Baden Photo, which takes place each summer, draws thousands to Baden, Austria to enjoy breathtaking photography exhibits displayed outdoors among parks, gardens and town buildings. Festival La Gacilly was originally created in 2004 by Jacques Rocher to celebrate photography in the small Britannic commune of La Gacilly, France. The fruit of the collaboration between the Festival Photo La Gacilly team and Austrian publisher / photographer Lois Lammerhuber, the first annual La Gacilly-Baden Festival took place in 2018. This year, it is dedicated to photography in and of Eastern Europe, and will run from July 14 to October 26. More information can be found here.

The setting of an outdoor festival makes Festival La Gacilly-Baden one of the few remaining ways to physically bring photography to large audiences in the midst of the pandemic. Even so, social distancing rules apply.