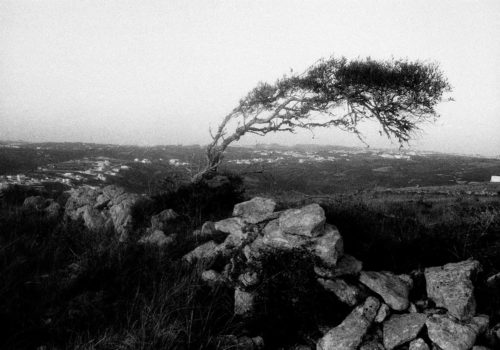 Photography has always been a controversial medium as a form of expression, with probably too much controversy throughout his history, especially regarding his role as an art form, however, something that no one can deny is the fact that photography always lives in the past, from the moment we press the button on our camera, that same image is part of the past, and that is immutable.

Interestingly, this particularity has always been one of the things that interested me the most in photography, also and above all, given the particularities of my artistic projects. These have always been too personal, a constant struggle to understand me, and to understand the world around me. Looking through the past for issues, habits, mistakes, virtues and projecting them into the present and future turned out to be very natural to me, even before I took my first image. By realizing and recognizing the power of photography could have in my self-analysis process, it became clear to me that it would be the perfect tool for my work, and therefore the best form of expression for me.

In “Everything Lay Still” that does not change, there is still a constant tension between me, the world and the consequences of my actions, all while I try to deal as well as possible with the universe around me, but also and especially with my own mind.

Inevitably, I was forced to slow down; somehow my way of looking at life until then has been taken from me. I felt, and still feel (but especially looking back) that the world has been in an indefinite pause, in constant limbo. All my immediate plans have been canceled, all my dreams have gone further, almost as if they were delusional utopia.

All of this was a process.

A strange way of learning, to go back to the beginning, and without any certainty of being able to possibly start over.

So I want this group of images to demonstrate all the inner chaos I have experienced in the recent months, but above all, the tremendous nostalgic burden that has plagued me; in my countless ramblings to try to empty my mind, I was constantly plagued by feelings of helplessness in life; in the world arround me; and when I take the camera to try to record these moments, there was always a dichotomy of sensations, somehow it was as if I had already witnessed that same moment … sense … suffered …; On the other hand, I often seemed to be living another life, to be in someone else’s skin.

Based on this, it made a perfect sense to re-shoot in analog black and white, to accentuate all the elements above, to bring the nostalgic load that I thought this project needed, because it could not be otherwise . But especially for the specific characteristics of the whole process itself, and this process was a permanent part of me throughout this period, the attempts to damage the film, the constant inconsistency with which I forced myself to reveal these images …

And now? Finally after 10 months they told me that my life could go on and on … as if nothing had happened (or almost), as if it were just a dream. At the same time, I need a different path if I want to continue, another rebirth, where all the old habits will not take place, and this is not “negotiable”. And how can I do all this? I still have a lot of unanswered questions, but the world keeps spinning, and I with him.

Somehow, I would like this project to be seen as the end of a cycle, in my life above all, but also in my work as a photographer, as an artist (and it has occurred to me in the process to destroy all my archives during the last year, I’m glad I didn’t).

People camed and went away, some of them stayed, others were always there; some of them lives purely in my images, others nonetheless live beyond this images, mostly in myself. One of them told me something I held back: “You have to photograph the future!”

And in fact, the future is just around the corner, I’m just not sure how I can photograph it, but that’s another story, and another project.