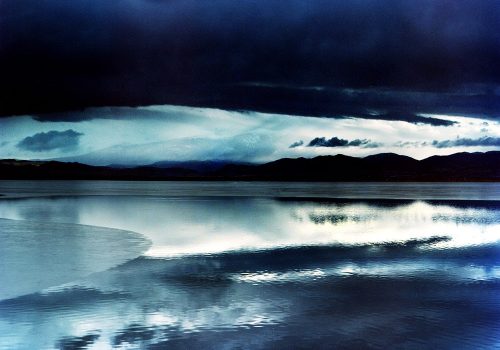 From source to sea, Ansley West Rivers has traveled extensively along the length of multiple American rivers since she began the Seven Rivers project in 2013. Traversing this wild territory through hiking or rafting over multiple weeks with a large format camera, West Rivers takes stock of both her subject matter itself, rivers, but also the relationship that unfolds between her and the natural landscape. Creating compositions on each negative by shooting several exposures onto each frame with the help of masking tools that are placed in front of the lens, the resulting images are a marriage of documentation and impression. The human intervention in what might otherwise be a straightforward record of the natural world mirrors the human impact that threatens our country’s freshwater ecosystems.

In addition to these hybrid photographs, this installment of Seven Rivers will also include two cyanotype maps of our own Bay Area tributary systems. The maps illustrate the artists’ personal journey down each river and are based on the maps she uses in the field that she finds at parks, gas stations, and local bookstores The culmination of layers in this imagery depicts both her relationship to the rivers and the present-day surveys, which emphasize dams, reservoirs, industry and tributaries of each watershed.

On her ongoing and complex project of picturing our threatened waterways and the tradition of landscape photography, West River says: As I witness the beauty, degradation and changes occurring on all rivers, I have come to view our watersheds with expanding emotion. The history of landscape photography in the United States is inspiring and complicated. I have climbed mountains, floated streams and walked through forests that have enthralled the lineage of artists before me. I too have lugged heavy equipment and negatives on my back in order to capture the landscapes that support us physically and emotionally. But I am not shooting to lure people out West, prove the magic of live oaks or depict the novelty of wilderness. My goal differs as it is directed by the present. I too seek to depict the beauty that exists within every riverbend, but I no longer see the infinite, I am faced with the finite. In my compositions, I create within the context of the past and the present to bring more clearly into view the lifespan of freshwater, with the hope of not creating evidence of lost landscapes.

Ansley West Rivers was born in 1983 in Atlanta, Georgia and received her BFA from the University of Georgia and MFA from the California College of the Arts. In 2019 she had her first solo museum exhibition at Telfair Museum, Savannah, GA. West Rivers work is featured in many public and private collections including the Museum of Contemporary Art of Georgia, The Judge Collection, LaGrange Art Museum and The Mayo Collection. Additionally, West Rivers’s work has been shown at The Wiregrass Museum (Dothan, AL), Wattis Institute of Contemporary Art (San Francisco, CA), Sous Les Etoiles Gallery (New York, NY), Burrard Arts Foundation (Vancouver BC), The David Brower Center (Berkley, CA), Kala Art Institute (Berkley, CA), Hathaway Gallery (Atlanta, GA), The Print Center (Philadelphia, PA). She currently lives with her husband and two children in Victor, Idaho.

Founded in 2015, EUQINOM Gallery represents emerging and mid-career contemporary artists. The gallery is focused on presenting multidisciplinary work that expands the boundaries of photo-based practices. Ranging from the ephemeral to the documentary, the program champions work that is rigorous in process and practice and demonstrates a lively engagement with photo and art histories. EUQINOM Gallery represents their artists and works closely with their clients to create a tailored and thoughtful approach in all relationships. The gallery is proud of its dynamic roster of artists and continues to grow artist practices through a combination of interdisciplinary artist talks, museum placements, publishing and other dynamic career opportunities.

Open by appointment only.