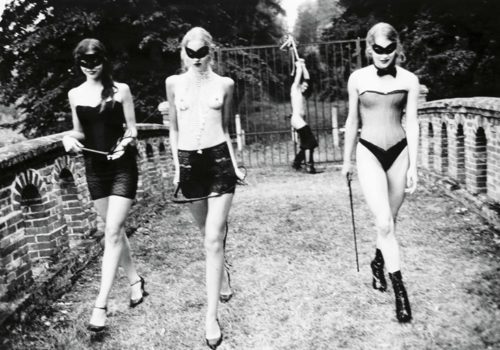 Blind, insatiable, violent, voluptuous, enigmatic, imaginary, obscene, transgressive, elusive desire is part of a rich philosophical tradition that has, in turn, been despised and adored so much so that it touches the essence of our being. Man is a “watchful desire” according to André Comte-Sponville. Unable to look steadily at one’s own desire, to predict its appearance or to grasp its meaning seems a wasted effort. This subjectivity inherent in desire has given rise to multiple artistic interpretations in the medium of photography. Lascivious, fragmented, veiled, blurred, passionate, fantasized bodies: innumerable are the faces of Eros.

Eroticism, however, has not found itself the subject of extensive research in the history of photography. Worse yet, it is often confused with nudity, sex, and pornography. What makes eroticism so special? In a digital commercial world marked by the omnipresence of pornography, what value does eroticism have?

The group exhibition “Behind Desire” seeks to present eroticism, the Art of Desire, and to examine its different facets in artistic photography. The first installment in the EROS & PHOTOGRAPHY exhibition series, “Behind Desire” awakens an awareness of the diverse, often complex, yet ever powerful meaning of eroticism.

Eroticism is not sex. It originates and goes far beyond the mere physical relationship.

The presentation is completed by a selection of contemporary photographers such as Renaud de Gambs, Thomas Hodges and Gérard Musy as well as Eva Ionesco, Mona Kuhn and Ellen von Unwerth, highlighting the perspective of women.

Among them, the works of the three winners of the competition on Eroticism in Photography organized by CHAUSSEE 36 are to be discovered during the exhibition.

“Movement Towards the Other” (Simone de Beauvoir), “Art of Desiring and to Make Oneself Desired”, (André Comte-Sponville), “Triumph of Dreams Over Nature” (Emmanuelle Arsan), “Approval of Life Even in Death” (Georges Bataille) – How to visually express eroticism, a concept with multiple definitions?

More than 60 years after the Surrealist exhibition “Eros” at the Daniel Cordier Gallery (Paris, 1959), a new participatory journey is offered, a labyrinth through the photographic worlds of Eros.

This exhibition does not lift a veil on eroticism by illuminating it only under an aesthetic as- pect of the theme, but allows the visitor place for an encounter with his own Eros, beyond gender and sexual orientation through a diversity of situations which generate or follow de- sire.

An exhibition curated by Mathilde Leroy.