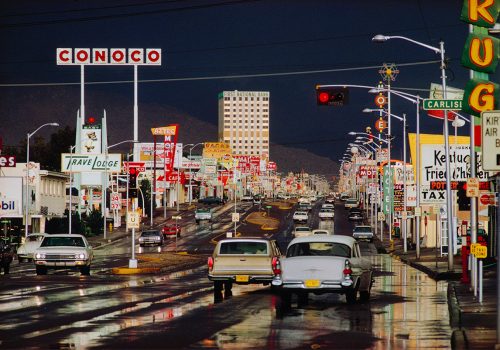 Les Douches la Galerie presents its second exhibition of the singular works of Ernst Haas. The nearly forty prints that make up Visionary Colour, most of which have never been exhibited before, testify to the timelessness of his work. Taken between 1952 and 1981, the photographs presented here display an ambiguity bordering on the abstract, shot through with superimpositions, off-centered framing and blurriness.

If we go by what most histories of photography claim, 1976 is the year that colour photography entered museums. And yet, fourteen years before William Eggleston and Stephen Shore, Ernst Haas had put together an exhibition explicitly subtitled Color Photography at New York’s Musuem of Modern Art. Encompassing some eighty images, Haas’ exhibition was the first monographic exhibition in colour organised by the institution and a new accolade for the photographer. Born in Vienna in 1921, Haas began working at Magnum in 1949 and settled in New York in 1951. He published the first entirely colour portfolios for Life magazine, in 1953, and participated in numerous group exhibitions at the MoMA, including The Family of Man (1955) and The Sense of Abstraction (1960). So how is it possible that Ernst Haas, Color Photography is not considered an historical milestone and that the photographer has lost his rightful place in the history books to a subsequent generation of photographers, comprising William Eggleston, Stephen Shore and Joel Meyerowitz?

The exhibit was held in the fall of 1962. John Szarkowski had just become director of the MoMA’s photography department and was setting up the last exhibitions that his predecessor Edward Steichen had planned. In 1963, Szarkowski’s first initiative, Five Unrelated Photographers would set the tone and confirm that photography’s artistic ambition was inseparable from black and white. For Steichen, that was apparently not the case as he dedicated group exhibitions to colour (Color Photography in 1950) and abstraction (Abstraction in Photography in 1951). Steichen himself was less concerned with art and, as a photographer who had tried his hand at everything, he merged the uses of photography, be they documentary, scientific, creative, experimental or even commercial. So, although he brought colour photography into the museum, Steichen was still able to comfort the established hierarchies that saw black and white as a creative tool for interpretation, and relegated colour, with its supposed realism, to a mimetic role.

It would take the exhibitions by Eggleston and Shore for this hierarchy to be blown to bits, even though Haas’ colour works show that they were a priori unfounded. While he had begun his career in photography with a black and white reportage on post-war Vienna, he quickly turned toward colour in response to growing requests from magazines, but also in order to develop a more subjective approach that was more concerned with disturbing rather than duplicating reality.

Through his use of close-ups and off-center compositions, chiaroscuro, out of focus effects and reflection and superposition, colour helps to alter perception. Haas never uses it for its descriptive value. On the contrary, it is possible to see in his use of it a nod to the painting of his time. His coloured, generally diaphanous flat tints bring to mind Color Field Painting. But that would be unjust to colour photography and its capacity for derealisation which, unlike abstraction and its divorce from reality, creates the often irresolvable ambiguity that Haas was looking for. Indeed, his finesse in using colour is what gives Western Skies Motel, Colorado, USA (1978) its surprising quality.

But it would be a mistake to reduce Haas’ colour works to a single intention. The body of work that we are now presenting at Les Douches la Galerie intentionally includes only a few well-known images that were published or exhibited during the photographer’s lifetime. It is true that one of them, 3rd Avenue, Reflection, New York City, USA (1952), was published in Life in 1953 and shown in the 1962 MoMA exhibition. But while the earlier exhibition emphasized images laded with motion blurs, which later became Haas’ trademark, ours eschews this gimmick in favour of more varied and renewed inspirations.

The variety is due in no small part to locations. Haas travelled frequently for commissions and reportages and his photographs clearly show that the streets of Paris evoke different images – like the market scene from 1954 – than do the streets of New York whose singular energy made the city the capital of street photography.

The renewal, on the other hand, is a question of subjects. The dates of the shots indicate that, especially beginning in the 1970s, Haas increasingly favoured the motif of the image within the image. Examples in the exhibition include a portrait of Marilyn Monroe and a poster of a couple kissing. Obviously the photographer was interested in the interactions between the images and their context – the city’s reflection that interferes with the image of the star, the fence that imprisons the embrace. But he was also undoubtedly noting the increasing presence of images in daily life and, in particular, of the televised images, also increasingly dominated by colour, that represented such stiff competition to Life, contributing to the magazine folding in 1972, an event that was surely not a matter of indifference to the photographer.

In fact, Haas photographed numerous colour television screens in the 1970s. He seemed to want to inventory the signs of contemporary America and its political, diplomatic, scientific, sporting and cultural mythologies, but also its dark side, embodied by the figure of Charles Manson. He also seemed to want to capture these new images in their technical materiality. Actually, this time, Haas did not go for collage or montage effects. The television image is delivered up as is. Nothing interferes with it except its definition and colours in all of their approximation and unreality, which could not but have caught his eye.