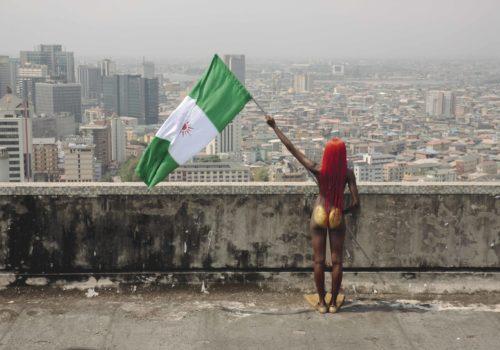 Synonymous with the art of travel since 1854, Louis Vuitton continues to add titles to its “Fashion Eye” collection. Each book evokes a city, a region or a country, seen through the eyes of a photographer. Lagos by Nigerian photographer Daniel Obasi is an anxious as well as ardent manifesto for Nigerian youth.

“The events of October 20, 2020 will forever be a stain on the Nigerian flag and I wanted to make sure that I never forget that as well”, Daniel Obasi told Patrick Remy, the book’s editor. In October 2020, fifty-six people were murdered by the Nigerian authorities after several days of demonstrations against police violence, against the corruption of the same police and for a true independent and non-executive justice.

Named #EndSARS (End Special Anti-Robbery Squad), the movement that gave substance to the demonstrations began on social networks and revealed, through photos, videos and testimonies, the exactions of the Special Anti-Robbery Squad: illegal roadblocks, corruption, illegal detentions, extortion, all kinds of violence and rape. A police force that was incriminated by several independent reports, including that of Amnesty International in 2016, of human rights violations.

“Watching civilians get shot by the military while waving the flag and singing the national anthem is still one of the most gut-wrenching things I have ever seen” relates the photographer. His book, published by Éditions Louis Vuitton, is a complete follow-up to this founding moment of his own political consciousness as an activist. “For the first time in a long time, my generation saw the rise of a strong, united voice against the government and oppressive systems”.

However, Daniel Obasi’s Lagos, subtitled Beautiful Resistance, is not a photojournalistic rendition of the protests. In this evocation of violence as well as resistance, the essential is in the sublimation. The artist presents in the whole work all the possible facets of youth double and composite.

These youth stand out by the profoundly free presence of their postures. The strength of the  numerous muses, used from one series to another by Daniel Obasi, is seen as much for the artist’s staging as by the choice of postures, a form of unreality that corresponds to the artist’s vision of Lagos: “A Lagos that is mysterious and surreal”

These youth from then on use make-up, dress in traditional clothes and then in divine dresses, in the clothes of a saint or with simple golden painting. they hold in their hands banners and lenses turned towards themselves, as if to better assert their own glitter and mock scorn. They portray a madly aesthetic pope and adorn themselves with masks of harlequins, bauta and moretta which, coupled with the boubous and fuchsia costumes, overplay the mystery without ever tiring.

Naturally these compositions of bodies, colors and costumes, which singularize the warlike postures and shout in image all their will, defend an enlarged vision of the youth. “Presenting different ideas of beauty allowing us to question our conventional knowledge of appearance or the actions expected of everyone. It’s no longer just about telling the story of Lagos’ vibrant rebellion, but much more about opening up the spectrum of dreams and metaphors shared by the queer and feminist communities.

Lagos is meant to be an affirmation rather than a sum of observations. It is neither a request nor an approval, but rather the cry of an existence. The composition of this new opus of the “Fashion Eye” collection has been carefully thought out to serve this impulse. The photographs are all shown in full page or double page spreads, giving the reader the ability to dive into the settings, to move as in a cinematic composition, from one setting to another.

The book follows a common thread marked by the presence of the color red, that “gives it a kind of wholeness” according to the author. The repeated presence of several muses with shots sometimes close to the face, as if to emphasize their irregular beauty, sometimes distant, reinforces the unreal character of the scenes, the artist playing very clearly with his surroundings.

The same photograph is finally, from one page to the next, printed in its half of the book on a matte paper and in its other half on a glossy paper, as if to reinforce the discontinuous, confusing, almost chimerical character of these fantasy characters.

The book ends (or almost ends) with a generic, that we imagine could scroll before the lights brutally return. A woman seen from the back bites an apple in the shadow and the wake of a cross. Another symbol to solve, in a book full of dreams and beauties. This book is by far the most mysterious of the collection«Fashion Eye ».  And as an answer to the violence of the police, the injustice of the state, it is a wonderful way of laughing it off with a scornful weapon, beauty.