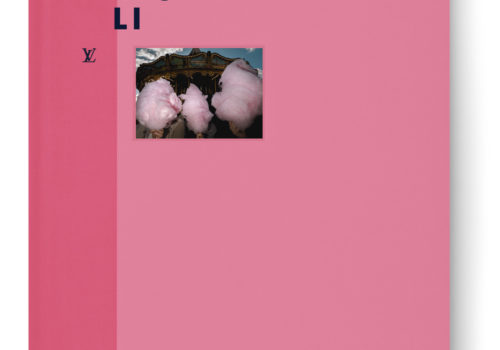 Synonymous with the art of travel since 1854, Louis Vuitton continues to add titles to its “Fashion Eye” collection. Each book evokes a city, a region or a country, seen through the eyes of a photographer. With Paris, Chinese photographer Feng Li delivers an unvarnished vision of Paris, playing on the clichés and tourist stereotypes of the capital.

Everyone knows that Léon Atget’s Paris of narrow streets and dusty courtyards no longer exists. Of Brassaï’s vision, perhaps the winter mists that bite the Saint-Maximin stone of the monotonous buildings remain, or the great strings of lights seen from the heights and which still outline our boulevards and avenues. What remains of Jean-Loup Sieff’s Paris, described in this same collection of Fashion Eye? The illusory grace of the charm and elegance of its women, a few cafés where one gets bored.

Paris is not dead, or dead as the case may be. The city lives with its time, torn between the weight of its stones, the habits of its bistros and the imperative of its time. To the great displeasure of the knights of the immutable, it changes and transforms, it sells itself to tourists or lives on the fringes, on the popular periphery. And if literature was once its natural griot, it now has cinema, series and photography as its oracle. The image. To disguise it as big American productions would like to do, to tell it raw, true and hard as our police series would like. To drown it in the uninterrupted and anonymous flow, as Instagram would have it. And sometimes, in these images, a coherent vision emerges, accuracy and distance. This is the Paris of Feng Li.

Feng Li works as an official photographer at the propaganda office in Chengdu, capital of Sichuan province. On the fringes of political meetings, conventional fights and group photos, he shifts his camera on his fellow citizens and shows them in their daily lives. His personal work, collected in 2017 in White Night (Jiazahi Press, 2017), goes beyond the conventional framework and shows his fellow citizens at parties, in abandonment, in rocambolic poses supported by a raw light. His images reveal an unbridled society, full of derision and a form of madness that goes against the accepted ideas of the West.

His book will take him to Paris for four months in residence at the Cité des Arts in October 2019. Paris at that time is imploding and overflowing. Strike at the SNCF, strike at Orly, firemen’s strike, muted revolt against the pension reform and resurgence of the Yellow Giles movement. Paris is a great artery of demonstrations, which Feng Li has fun recording. He plays with the contrast between unchanging streets and the accoutrements, disguises and strangeness of the demonstrators.

Another curiosity in this view is the importance of colour in a city that has been described as grey, dull, morose and sad. Feng Li finds, on the contrary, the strangeness of his colour: that of the road markings on the asphalt, which would remind one of Sol LeWitt’s lines. That of African outfits, plastic textiles and synthetic down jackets, and tempting pastries. The even more symbolic one of the French flag, curiously tufted and satiny evening wear, which is waved in cabarets, and other miserable undergrounds.

With this eye, Paris becomes an amusing city while losing its singularity. The photographer is more interested in shattering the myth and its romanticism. The Tuileries (re) become a place of exhibitionism. The Eiffel Tower is a vulgar cardboard box that no longer creates any illusion. There are no buildings, no landscapes, but rather the flatness of the street. Passers-by are caught in information roundabouts and the photographer looks at his subject from the back as well as the front. This is a way of showing his anonymity, of reminding us of the flatness of everyday life, while at the same time underlining that the photographer’s astonishment, the one who knows how to see, also comes from this same ordinariness.

The book is made up of Parisian shots intermingled, in the composition of the graphic designer and editor Patrick Rémy, with those taken earlier by Feng Li. Paris remains predominant. A few scattered photos raise questions – what are they saying? Do they have a meaning here, a form of irony or a message that is undetectable to the reader – without disturbing the general reading of this series.

Paris flattened out in the candy pink of fairs… Paris raw in its evening asphalt… Paris in the colour of entertainment and the mechanics of pleasure. The picture certainly does not have the phantasmagorical elegance of romantic Paris, but does this Paris still exist? Rather, it has the strange character of the ordinary. And from Feng Li’s vision emerges the affirmation of a language of image penetrated by humour and irony. A delicious and irreverent language.