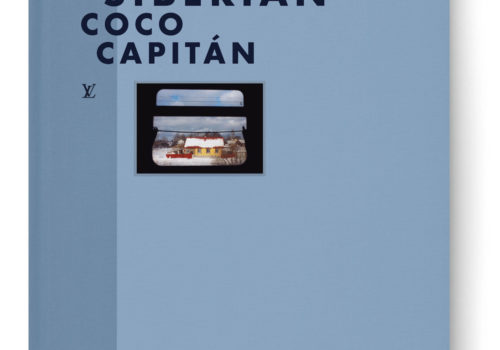 Synonymous with the art of travel since 1854, Louis Vuitton continues to add titles to its “Fashion Eye” collection. Each book evokes a city, a region or a country, seen through the eyes of a photographer. After Sarah Moon’s Orient Express, the collection takes on another mythical train: the Transiberian through the eyes of Coco Capitán.

We don’t all think alike. Behind this truism, science teaches us today that each brain is wired differently from another. For one being and for another, thinking, being moved, feeling, reflecting is different every time. The brain is built of adventures. Few mechanisms and many blank sheets. It is built by chance encounters. So much so that it would be, supported by electrodes and brandished encephalograms, always different from another.

Yet its imagination is filled with repetitions and generalities. To have a body of one’s own is not to have one’s own thought. pooled comes first the game of the similarities. They are similar dreams, that psychoanalysis classified in typologies: a never ending fall, a fight in the void. Anxieties projected by others, amplified, standardized, rehashed. And, in other greater wrongs, all these stereotypes thrown on faces, of people seen from  afar, not daring to approach.

A brain different in its envelope, but with very common thoughts. Without a doubt we must blame films, photography, the predominant image, and its distorted, archetypal use  by the media. There are bigger fish to fry. The mediology or criticism of images do it wonderfully. Let us leave to the competent the sharp thoughts. Let us prefer the side step.

The Spanish photographer Coco Capitán formulates without embellishment this curiosity of the journey. Each time it is dreamed of by the image and very often made curious by the singular and personal apprehension of its reality. “We tend to reduce the cities we discover to the preconceived idea we had of them. This is particularly the case nowadays: it is very rare to go to a place that we have never seen before.

The imagination of the Trans-Siberian Railway is that of a train that is a little lousy, full of beaten-up Russians. A train of noises and gargoyles, a train of “talkative and friendly passengers” caught between two cities a continent long. The train carries its wagon of stereotypes. It is wrapped in a poetic gauze, in the simultaneous words of Blaise Cendrars. It comes in perhaps to mingle the imaginary of the trains of the other world, in reverse of the polite wagons of our Occident, where the crowded benches invite falsely to meeting.

The paradox of the image, photographic or cinematographic, is to come to reveal the world in a fragment, while coming by this fragment to despoil the remaining discovery to be made. It is a despoiled knowledge, a door that opens on a narrowing path.
But a look however can come to crush a well established imaginary. Perhaps this is what photography is all about: rewriting one’s imagination. To cross Russia in this Trans-Siberian Railway is to learn about solitude and gentleness. One then the other, one in the other. Coco Capitán crosses, without any great encounters, a whole world of vast plains, snow and silent steppes. In the cold mornings and long pauses of the station, she sees the solitude of forgotten stations, the elusive and curious gaze of the one who lives and is visited with her eyes.

It says the enjoyment of the boredom of the landscape that passes. This one endless and which changes there with a house a little more colored, there with a hill more crushed, small touch by small touch, until Vladivostok. Her photography marvelously restores the frame within the frame, this substitution of the eye at the distance of a window, between the fixed and the moving, and which makes this joy proper to the voyages.

At the end of the book, we come to see only that. The snow and the calm, the silence and the continuous rolling. There would be no encounters? A train without passengers? A journey without small passions? Worse. Too many people to talk to, and so few to exchange ideas with. It is sometimes late in the game that travels reveal their surprises. The blessed photographer concludes her journey and her book with this family she met in Eastern Russia, which was a form of joy after a long asceticism.

Patience is the key to relief.