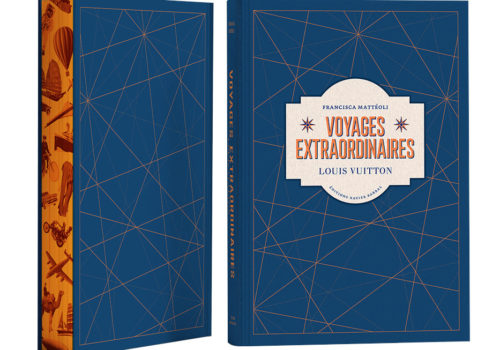 Synonymous with the art of travel since 1854, Louis Vuitton has published a book by Francisca Mattéoli with the evocative title, Voyages extraordinaires. The book is conceived as a collection of stories, where the breathtaking rubs shoulders with the forward motion and refinement of old-fashioned transportation.

In the spirit of an elegant editorial line, Extraordinary Journeys opens like a passport to elsewhere, to the unknown of forgotten adventures, of outdated transports, of yesterday’s follies that seem, today where everything goes very fast, feverish, massive or derisory. It is a whole unit in hand, co-published with the Xavier Barral editions. A big book as a bible or a scholar’s book, bound in impeccable leather and tinted a deep blue. On the spine the hand caresses the silhouettes of the future means of transport, bicycle, elephant or dromedary, in the air and on the seas, a mottled marvel. The interior contains a whole ocean of images, four hundred photographic archives, recolored images, travel posters, advertisements, aviation shields… some maps are missing, so much the better, to get lost it best to use imagination.

The invitation to travel is not limited to the profusion of archives, it is above all through the sum of small stories told by Francisca Mattéoli. And rather than making the great History of travel, the author has sought to gather adventures in a somewhat disordered chronology. The watchword is amazement, the spectacular, where the most famous human adventures are told as well as the small feats passed under silence. The book is not less thorough, joyfully talkative when it comes to telling the passage of the South Atlantic in a seaplane, and especially in each story, such as the fearful expectations in front of the funiculares of Valparaiso rising, those great infernal boxes. It has the great merit of placing the human in the whole of the technological adventures. Because before being a race, a journey, a world tour or a simple elevator to heaven, an extraordinary journey is born from a crazy idea and is embodied in a carnal envelope.

Few people, specialists aside, know the names of pioneers, engineers, financiers… Or is it the youth of this pen? If we tell you Roald Amundsen, the first conquistador of the South Pole at the helm of an icebreaker on the square of the southern blades? And the American Fanny Bullock Workman who cycled from Europe to Java? And her colleague Harriet Clark Fisher at the wheel of a locomobile, thirteen months in 1909 and 1910 on the roads across the globe, crossing the seas in boats, the rivers in dugouts, to reach Japan? And the smoky adventure of Charles Godard and Jean du Taillis in a Spyker, driving at full speed from Peking to Paris? How many other forgotten figures, among others, more famous – the Wright brothers until the famous sentence of Neil Armstrong.

The extraordinary is also synonymous with failures, disasters, if not tragedies. Nadar’s second trip in a hot-air balloon crashed to the ground after fifteen hours in levitation. The proud Titanic sank, as we know, and the transatlantic companies struggled to display the Blue Ribbon on their bows, losing money in a never satisfied pomp. We sometimes forget that the first Concorde was Soviet, without the Tupolev Tu-144 and its Moscow-Alma Ata route becoming profitable.

The journey throughout is questioned in the light of these human adventures. And these underline the excessiveness of inventions, the race towards innovation: the navy, the automobile, aviation and then space exploration constantly push back a form of representation of the world. To this furious speed, to the imprecation of the bodies projected in the machinery, Francisca Mattéoli also reminds us of the softness of the pirogues, the silence of the junks and the rustle of the barely touched waves. There are under our feet, on the paths, in the ramble and in the stroll the simplest wonders. For a journey, you don’t always need a big engine but also the smallest ambition.

Photography in this book plays the role of a developer. As soon as there is a feat, we find this medium. With the journey comes the taste of the communication. It is everywhere, from its historical role to the tourist message. This is still true today, except that images move and repeat themselves to exhaustion when there is a feat, or dies in a similar and continuous flow when it becomes tourism. Without images there is no extraordinary, there remain the words, the sayings, the stories, and all weigh with all their weight on the imaginary. A journey in a notebook is a story of nonsense, an open door to grandiloquent. A story weighs with all its weight and makes you dream, but images crushe everything.  Images fixe the memories. They tell the weather conditions,  recall the figure of the heroes. They have this role of archive, undoubted proof of the epic.

There is no need here to reopen an age-old debate.  Literature against photography. Word against seing.  Images against the word. In these Extraordinary Journeys, the two are wonderfully intertwined. Drawing a parallel between technical progress, human prowess and the discovery of new frontiers, the book reminds us how much travel was a permanent challenge for almost two centuries, redefining the vision of our world in fits and starts. It was also an elegance, a sum of aesthetics, that the book awakens and embodies wonderfully.