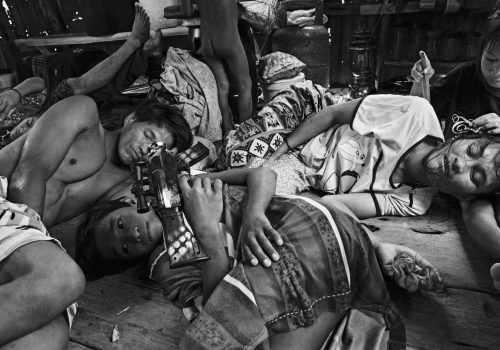 Lost at the borders of northern Borneo, the Célèbes archipelago in Indonesia and the southern Philippines, navigating the Sulu and Célèbes seas, thousands of sea nomads see their way of life threatened by global warming. In this region, a real powder keg, where pirates, Muslim extremists now linked to Daesh, corrupt police officers, traffickers of all kinds who transport: humans, drugs, cigarettes, weapons …, these few thousand stateless nomads are trying to survive.

Pierre de Vallombreuse, lived for 10 months, on the occasion of 5 trips over a period of 10 years, with a group of stateless nomads who come to rest on a small island, forging a relationship with them full of respect and trust. Little by little he saw the drugs reach the nomadic Badjaos of the small island he was documenting: “During the last trips the drugs arrived. Its use now reaches the nomadic Badjaos of the small island. I thought naively that the island was beyond the reach of this scourge since it is located an hour from the Port of Sempoerna where I visited in 2007 slums filled with illegal Badjaos from the Philippines who consumed it to forget their misery and their uprooting, all kind of drugs: amphetamines, glue, shabu ,. Entire families, from grandfathers to grandchildren around six years old, sniffed this yellow glue together in their barracks made of rusty corrugated iron and reclaimed wood planks. A deceptive smile, an exploded faith, badly concealed despair.

Now in the cove of the island, small transparent cellophane bags, stained with yellow residue from the glue, float on the sea like so many distress signals .”

“Pierre de Vallombreuse is committed, using photographic testimony, to the existence and survival of all peoples historically victims of national states and whose civilizations are victims of our civilization. He discovered himself in his own humanity by discovering their humanity. In this fight also revealed the meaning of his life “. Edgar Morin

Since 1986, this photographer has tirelessly witnessed the life of indigenous peoples on the five continents. He has created a unique photographic collection of 43 constantly evolving peoples, thus paying tribute to the precious diversity of the world. Each group of people shows the multiplicity of responses to the living conditions imposed by nature and history. Reading the book “Tristes Tropiques” by Claude Lévi-Strauss sheds light on his trajectory: Pierre de Vallombreuse makes us discover the complex reality of their lifestyles and he fights for the respect and fair representation of these weakened populations, in danger, whose legacy is vital to us.

A committed book of photographs, in collaboration with Survival Internacional France which defends the rights of indigenous peoples in the world and Blinkl which has enriched the content thanks to Augmented and interactive narration without application.