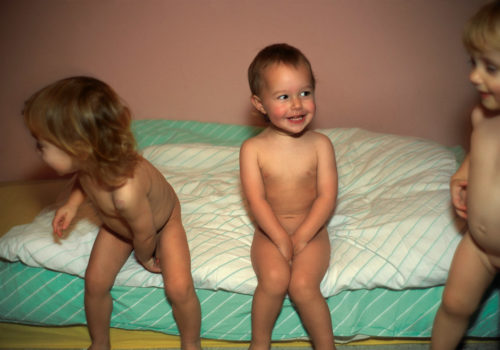 We had almost forgotten about Nan Goldin, whose latest book, The Devil’s Playground, was published eleven years ago. Three decades after her seminal work, The Ballad of Sexual Dependency, was released in 1985 (and recently reissued), now comes Eden and After, which she unveiled for us on the couch of her new Brooklyn apartment.

Published by Phaidon, Eden and After is a compilation of 300 photographs of children taken throughout her career and across the world. Many of the subjects are her family: closeness has always been  crucial to Goldin’s work. Divided into thirteen chapters, the photographs depict the fun and games of childhood as well as its anxieties, fears and tears. Together, the images of different states of mind tell the story of youth.

In this narrative, the first Goldin has ever done, the children “come from another planet” and, in the end, return there. The book is about the lost paradise we all carry inside ourselves, a paradise which Goldin hopes to recover through her photographs, as natural as ever but, given the subject, less raw. The reader must first know how to understand Goldin’s extreme sensitivity in order to be carried away by her original thoughts. The title helps the reader imagine an existence before life, with the parts of the book suggesting that freedom can only be enjoyed up to a certain age. “When children socialize,” says Goldin, “they lose their ability to understand things by themselves. I think that children have more to teach adults than the reverse.”

The brutality of birth, mischief in a hotel room, family reunions in the bathroom, passionate embraces, improvised carnivals, portraits on a bed, the solitude of a moment, games on the beach: in all these constantly moving images, the emphasis is placed on the freedom to be, to think, to become, which Goldin believes is the most important thing for children. “Here, everything is related to the child’s autonomy, which never gets enough respect,” she says. “I think that the worst thing we can do to children is to make them feel ashamed of who they are, especially to be ashamed of their bodies. The child is a savage, but I don’t associate savagery with violence. This is about freedom.”

Nudity, a recurring theme in Goldin’s work which has often earned it comparisons to classical painting and sculpture, is present throughout the book. A hyper-realistic and suggestive nude child is a way for Goldin to rethink society, and at the expense of critics who in the past fought over these controversial images. “What’s established in these photographs is a reflection on the malleability of one’s identity,” says Goldin. There’s an entire chapter devoted to children who “change sex.” On the book’s cover, it’s not clear whether the child is a girl or a boy.

“It’s Eden. The word can mean many things. For me, it’s first of all an idea of paradise, a return to purity, a time before judgment. I think of Eden as a state of the human being. And I see a parallel between children and drag queens. Because everyone lives as they see fit. They’re all malleable. They can transform. When I was 14, I told myself that the most wonderful thing that could happen to this world would be if we couldn’t tell what gender someone was until they took off their clothes.”

Eden and After is a book to browse without judgment, as its author would have it. Some of the photographs, like others by Goldin, remind us of our own memories and experiences, perhaps because Goldin’s greatest contribution to photography was her “visual democracy” where amateur and professional photographers are regarded on equal footing. And as always, Goldin’s work undoubtedly says something about herself. As she sat delicately leafing through the book, she mentioned she never knew the joy of raising children. “I would have liked to be a father, but a mother, that’s really something else. Obviously, it’s something I regret.”