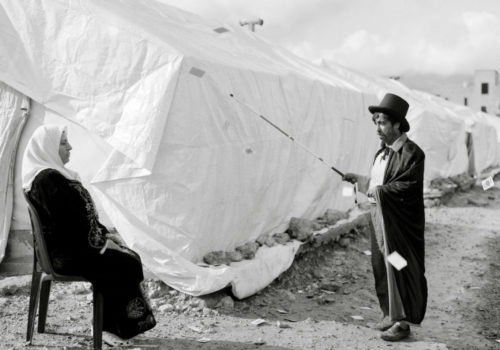 East Wing opens its new group exhibition on 10 March 2016.  Titled If I Leave, Where Will I Go?  The exhibition features the work of three photographers : Leila Alaoui, Tanya Habjouqa and Omar Imam.

Every day, all over the world, people grapple with the most difficult decision of their lives; to leave their homes in search of a better life.

Throughout history, for many cultures migration has been an essential fact of life. The reasons people choose to migrate are varied and almost always complex. Some people drastically change their lives to improve their economic situation, or pursue better education. Others leave to escape human rights abuses; torture, persecution, armed conflict, extreme poverty and ultimately, death. War reporting tends to focus on the devastation of landscapes and casualties of battle; it’s much harder to visualize stories of the resulting psychological effects of those who escape such conflict and devastation. Even sweeping vistas of tent cities set up on dusty border crossings cannot convey the scale of human destruction, or the soul-destroying loss of homes and disconnection of culture that is experienced by a refugee.

In response to these pressing global issues and the devastating effects they leave in their wake on vast populations and cultures, East Wing presents, “If I Leave, Where Will I Go”, a group exhibition of photography and video installation featuring the work of, Leila Alaoui, Tanya Habjouqa, and Omar Imam, three award-winning artists who use their unique humanistic perspectives to reflect on preservation amidst conflict. Devoting an enormous part of their creative energies to documenting this growing wave of instability in the 21st century, these artists use photography to illustrate both the tenacious fight and the real life hardships experienced by those who risk everything; altering their lives irreparably in order to survive.

“If I Leave, Where Will I Go”, is dedicated to the memory of our dear colleague and friend, French Moroccan artist, Leila Alaoui, who was tragically killed while on assignment for Amnesty International in Ouagadougou, Burkina Faso in January 2016.  East Wing presents Leila’s video installation, “Crossings”, which is just one chapter of her life’s dedication to the unfolding story of migration through her work. “Crossings” reflects on experiences of sub-Saharan migrants who embark on the perilous journey to reach the elusive shores of Europe. Focusing on the collective trauma provoked by the embodied experience of crossing boundaries and becoming a fragile community in a new habitat. Alaoui’s installation explores the experiential textures of psychological and physical transitions and gestures towards the concept of Europe as a problematic utopia in the African imagination.

Tanya Hajouqa presents her latest work, ‘Tomorrow There Will Be Apricots’ , a popular proverb in the Levant, which means, “Tomorrow never comes,” or “In your dreams.” For Syrian refugees in Jordan, the burdens of violence are present in their scant belongings, heavy mementos to remind themselves of those they lost in the war. The draw to Europe seduces entire families, but most often because of the high risk and financial cost, it is the fathers and brothers who first make the journey.  The women keep their mobile phones like talisman, carrying within them voice messages of love, lullabies, and hope from their families. Habjouqa’s photos explore the complicated intimacies of everyday life of Syrian women who have been left behind, clinging to the hope that soon their family will be reunited  and, in too many cases, grappling with the knowledge they will never see them again

Omar Imam’s “Live, Love, Refugee” explores the mental state of Syrian refugees in Lebanon, specifically investigating how relationships and dreams are affected by conflict and displacement. Working with his subjects in a theatrical manner, each acts out their personal stories of pain and desire in a surreal re-telling of the experiences they encountered while crossing multiple borders to escape their war torn country.

ACCOMPANYING EVENT
Special Film Screening
Wednesday 23 March 19:00
QUEENS OF SYRIA – a film by Yasmin Fedda
“It is like us; we were all queens in our own houses. Then we lost everything. ”
Fatima / UK, UAE 2014 / 70 minutes – Admission FREE
http://east-wing.org/events-pc-19.html