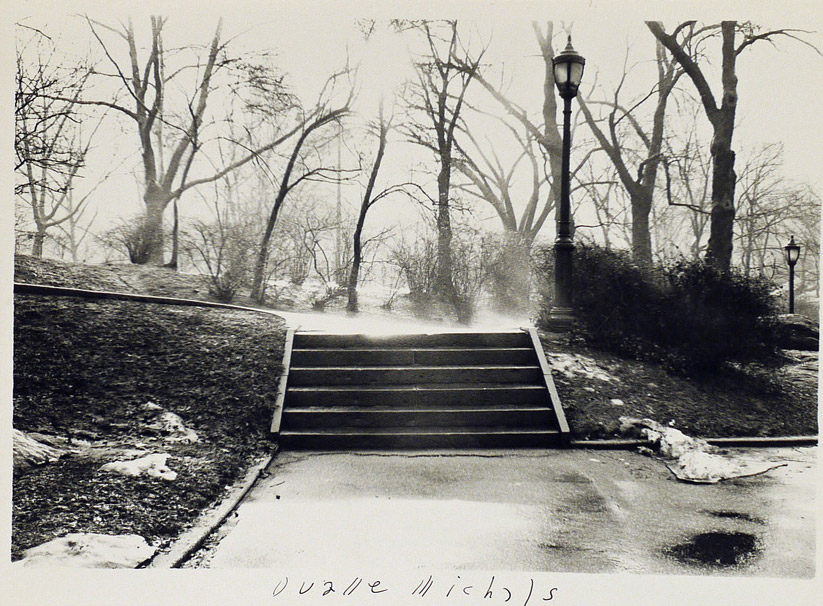 The poet and photographer Duane Michals is well known for his sequences, series of captioned photographs influenced by surrealism and storytelling. Before revolutionizing photography in the 1960s with this approach, Michals had taken a more classical approach to image, with works of reportage, portraits and urban scenes. Empty New York (1964), his first real series, which depicts the American megacity as a ghost town, is today on view at the DC Moore Gallery in Chelsea.

This series shows its debt to Eugène Atget’s photographs of Paris, which Michals first saw in 1962. It resembles an “empty theatre” brought back to life through anecdotes and characters from the photographer’s limitless imagination.

Michals wandered through this urban desert on Sunday mornings, photographing its streets, storefronts and subways, all empty, trying to become, he says, “Atget’s apprentice.” The 30 black-and-white prints appear in a small format which evokes the crowded feeling of the city, silent and supernatural, seen here as in the aftermath of a disaster film. There’s a laundromat near Michals’ apartment where he used to go, a typical New York hair salon, a run-down butcher shop, an alley behind the Coney Island roller coaster, a window filled with women’s shoes, litter on a subway track, a bridge, a restaurant, the bank of a river, a room, a staircase. The photographs instill such a feeling of nostalgia for the French photographic tradition, they should be set to accordion music.

Viewers should imagine themselves, as Michals would surely want them to, wandering through these empty spaces, playing out the roles of the tragic hero or the clown, observing the surroundings and thinking about existence, so that the photographs become more than simply architectural shots. This is the great power of Michals’ photography: using elements of reality to enter into fantasy.