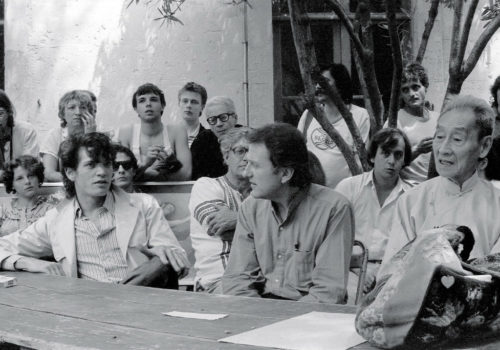 His name: Denis Barrau. He was engaged as unpaid helper by Lucien Clergue in 1974 for the Rencontres d’Arles. At that time, he and his friend Philippe Dumoulin took some photographs. Today, these became a fabulous book entitled “Rencontres d’Arles: the Beginnings” with as a bonus, the souvenirs of one of the other founders of the Rencontres, Jean-Maurice Rouquette.

Ahead of publication, Denis Barrau gave us these images and this text.

Jean-Maurice Rouquette told me about the origin, the beginnings and the rescue of the Rencontres d’Arles of which he was the co-founder. It was when I showed him my pictures and those of Philippe Dumoulin selected from our archives and organised as a narrative.

But, in short, how did we get here, to this book?

In 1973, I accepted to teach printing at a photographic lab. But I also had to keep shooting. For his part, Lucien Clergue came to give a lecture to talk about his techniques, including this: he said that he used to do his developing in the salad bowl of his mother’s using his finger as an accurate thermometer to control the temperature of the developer! Great!

At the end, he visited my exhibition and called me:

In June 1974, I found myself in the Musée Réattu in front of a long table covered by a simple sheet and a pile of panes of glass, another of newspapers (not just any old newspaper) and a single bowl of clean water, to prepare the exhibition “under glass” by Georges A. Tice. Then appeared, to check, the other founder of the Rencontres: Jean-Maurice Rouquette the curator here. And there, my work was appreciated from “ acceptable” to… “adequate”, by way of approval and congratulations.

In July, at the opening of the festival, I was responsible for welcoming and helping Ansel Adams in a lab as presentable as possible, installed in a school canteen! In the courtyard of the same place “the Sudre family” (as we called them) and their friend Denis Brihat did their demonstrations and shared their secrets, in an autonomous way. And it was “admission free”…

With the canteen tables in a square, we created something half way between an apparently improvised lecture and the meeting of a village association. Mr. D’Outrelandt of Brandt Brothers, the Nikon distributor, asked for my Leicaflex for a moment to try his 15mm Nikon. A breathtaking novelty which produced, among others, the image on page 55. The whole world is in the box. Including Bernard Perrine with his camera.

That’s how it was in this festival, in the beginnings…

Archives of the Eye of Photography – Denis Barrau, 2016