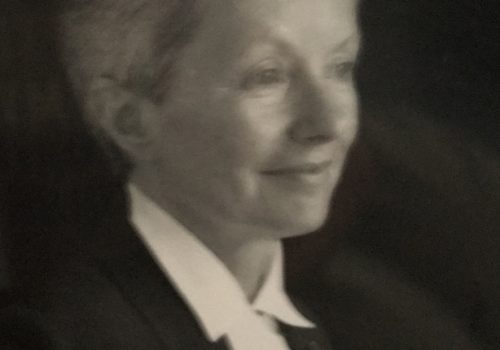 Her name: Evelyne Daitz. She was the partner of Lee Witkin and they both managed one of N Y’s legendary photographic galleries in the 70’s and 80’s. When Lee died 1984, she continued the gallery until 1999. Mary Engel, Director of Ruth Orkin’s Archives sent us these images and this text!

« I am sorry to share the sad news about Evelyne Z. Daitz who passed away on October 31, 2019. Evelyne was a dear friend and known and loved by so many in the photography community. She worked with Lee Witkin at The Witkin Gallery since 1976, and then took over as director after Lee’s untimely passing in 1984. Lee was an amazing person, and founder in 1969 of one of the earliest photography galleries in NYC. Evelyne continued to show the photographers they represented including George Tice, Jill Freedman, Andre Kertesz, Roy DeCarava, Manuel Alvarez Brazo,Collette Alvarez Urbajtel, Berenice Abbott, Wendell Macrae, Edward Weston, Philip Trager, Barbara Morgan, my parents Ruth Orkin and Morris Engel and many many others.The gallery had 150 exhibitions since 1984 under Evelyne’s direction and published an exquisite 25th Anniversary book, before the gallery closed in 1999. Evelyne continued as a private dealer until her passing.

My relationship with Evelyne went way back and she was an incredibly special and important person in my life. She had so many wonderful qualities including her warmth, her lovely smile and greeting whenever I saw her. Her wit, her laughter, and many other things about her will always be with me. Of course the dragonfly pins she wore were so beautiful…

I was so glad I was able to include her in my film on Ruth and her relationship with my parents was special, as was her passion for their work. I also worked at the gallery for a month when I was in college, and that was an eye-opening adventure to see how a gallery works. I will have many memories from seeing her at the gallery, the openings, dinners, parties, photo fairs, and auctions, Sending deepest condolences to her dear husband Howard Daitz, her nephews and their families, Scotia Macrae and all her friends,( especially her yoga class)… »